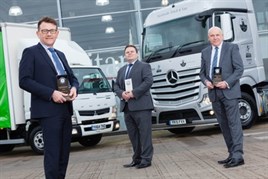 Yorkshire and North Lincolnshire franchisee Northside Truck & Van has been named dealer of the year at the Mercedes-Benz Truck awards.

The company additionally made the final three in the category for truck customer service dealer, which focuses on aftersales back-up, as well as that for truck sales team.

Meanwhile, truck sales executive Tony Birtwistle was a runner-up in the truck sales masters member of the year contest, and one of only four sales executives nationally to win a Diamond Club award in recognition of his tally of rigid vehicle registrations.

Northside’s awards success has not been restricted to its truck offering either. At the Mercedes-Benz Van Academy Awards ceremony, held previously, van sales director Leigh Margel was named van sales leader of the year.

Key to the company’s success in registering nearly 1,000 more new vans last year than it did in the previous 12 months was its accreditation last year as one of the country’s first Mercedes-Benz Van ProCenters.

All of these awards recognised an outstanding performance by Northside Truck & Van during 2014.

“It was certainly a great year, thanks to another magnificent effort by the company team,” said dealer principal Tim Ward.

“We’ve made fantastic progress across all parts of our business and it’s gratifying that our achievements have been recognised by the manufacturer.”

Northside continues to make huge investments in its people and facilities. Having opened its new Immingham dealership and spent an additional £1.5 million last year, the company is now investing another £2m into its branch network in 2015.

Topping the agenda is a major refurbishment and extension of its Sheffield facility, which is just getting underway.