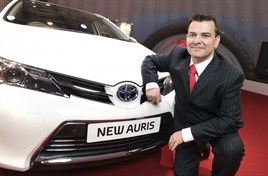 The UK Government has got to move away from its “obsessive focus” on CO2 and begin looking at initiatives to tackle air quality, according to the president and managing director of Toyota GB.

Matt Harrison points to the actions of other countries and says he expects the UK to follow suit.

“The political parties are aligned on clean air and we expect some of the things we are seeing in London to filter through to a legislative framework,” he said.

“The days where company car BIK tax is singularly based on CO2 will change.”

Toyota obviously has a vested interest in making this case: 23% of its sales are hybrid which will rise to 50% by 2020. And the company says it makes more money from its hybrid vehicles than from any other powertrain.

“The tide is turning from diesel to hybrid,” Harrison said, before adding: “But we are still investing in diesel because it is still an important part of the market.”

While manufacturers continue to bring down CO2 emissions on diesel cars, Harrison believes there are still “step-changes” to be made on hybrid, and not just on emissions – performance and driving experience will all improve with each new generation.

Neil Broad (pictured), general manager Toyota and Lexus fleet and remarketing, dismisses the statements from rival manufacturers about how the incoming Euro 6 regulations will minimise particulates, claiming: “Even with Euro 6, diesel is not in the same league as hybrid. There is also the real-world driving in cities – it’s an issue to blow out the stuff you have trapped.”

The latter point refers to the need to run diesel particulate filters at a high speed on a consistent basis to prevent them from clogging up from regular low-speed urban driving.