February is always a slightly quieter month for fleet activity as the industry readies itself for the release of the new registration plate in March.

This year with new car sales on a downward trajectory and European markets taking more of the new car production from the factories, many have worried as to the performance of the market over the coming months as the economic position continues to be a cause for concern.

The positive news is that the used car sector is performing well and retail consumer demand has remained firm despite some challenging weeks from a weather perspective.

One of the industry hot spots is that of the performance of diesel product and Cazana seeks to give a clear picture on residual value performance based on live retail pricing.

The chart below shows activity in the fleet sector for typical ex fleet cars for petrol and diesels: 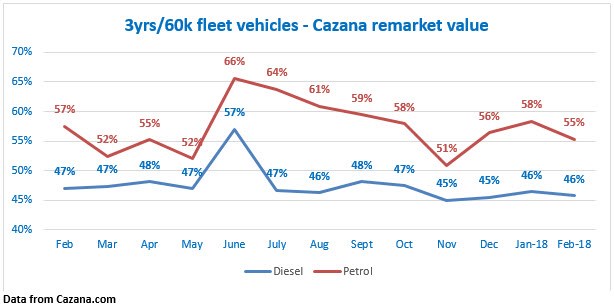 The chart shows that as a direct year-on-year comparison the difference in retained value for petrol vehicles has remained broadly similar having dipped just 1% when measured against February 2017.

This is interesting as it signifies that there is perhaps too much anecdotal discussion that supports the demonization of diesel.

The chart also shows consistency between the two fuel types although there was a clear peak in the differential in July and then towards the tail end of the year.

This matches the periods of intense press speculation.

In order to take a balanced view of the market the chart below shows performance of the key premium upper medium sector that includes the Audi A4, BMW 3 Series and Mercedes Class amongst others in comparison to the lower medium SUV sector.

The chart covers vehicles that are two years to five years old so quite a broad spectrum but representative of the market to which the fleet sector must remarket :

The data here shows an interesting downward trend for both sectors and this is likely to be related to the volume of product coming to the market.

There is a marked peak in values in May and June for the SUV sector and this appears to be related to volume de-fleet of certain product but is short lived.

There is, however, a clear effect on the trendline and shows the potential volatility of the sector.

In summary, the last month has seen a reduced level of de-fleet for fleet vehicles as is expected for the time of year.

The used car demand has remained strong and as it stands today, despite plenty of rhetoric to the contrary, diesel values demand in the retail market remains good and as such both retail and Cazana remarket values have remained largely robust.

This is a position that needs to be watched with cars and seeking more specific data must be recommended.

Fleets choosing alternatives to diesel ‘much faster’ than anticipated

Fleets are moving towards hybrid and electric powertrains much faster than the industry anticipated, research from Sewells suggests.