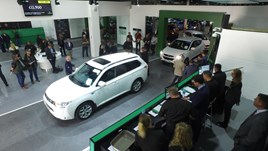 "However, higher used car volumes are likely to balance this shortfall as stock comes back from the peak new car sales years of 2013 and 2014."

Generally, 2017 saw a strong used market only faltering in Q2 partly due to dealers pushing new car sales into March as a reaction to 1 April VED changes.

This retail activity meant trade buyers had greater used stock choice in April and May earlier than usual which contributed to a Q2 average price fall to £6,485 from £6,609 in Q1.

Alternative fuelled vehicles (AFVs) are slowly growing in volume at auction (from 2-3% of all cars sold) with the higher average mileage versus diesel (64,700 v 54,415 miles).

Used car values dropped by 1.1% in December but will strengthen after the Christmas period, according to analysis by Cap HPI.