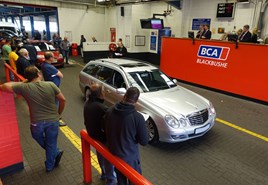 The remarketing company's Pulse report says the figure of £10,604 is a 0.3% decline against November.

Year-on-year values were up by £939 (9.7%) as both average age and mileage continued to reduce.

The report also showed that overall average used car values rose during December, with the headline figure climbing by £465 to £9,868 - a record value for the fourth month running.

Year-on-year, the headline figure was up by £1,527 equivalent to an 18.3% improvement - a result reflecting both the steady demand, well-balanced supply and the mix of vehicles available at BCA over the past 12 months.

Stuart Pearson, BCA MD UK remarketing, said: “December is the shortest trading month of the year and both the market sector mix and model mix tend to change quite significantly.

"Fleet and lease stock is typically in more limited supply, whilst dealers continue to sell part-exchange vehicles as a result of their ongoing retail activity.

"Buyer demand was consistent throughout the month and carried on to BCA’s digital platforms over the festive season.”