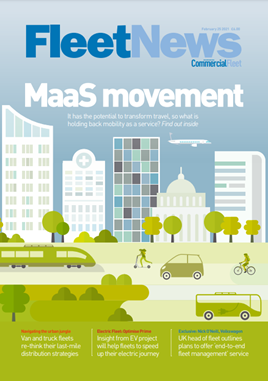 The new issue of Fleet News is available to read now, in digital-only format.*

The February issue takes a detailed look at MaaS, or Mobility as a Service. It has the potential to transform travel through the use of technology to ease some of the burdens around transport use and planning, while reducing pollution.

But since the concept was first suggested, passions have cooled. Features editor Andrew Ryan looks at why.

In news Gareth Roberts details fleets' calls for 'certainty' in next week's Budget on how the Government will make up the shortfall in fuel tax take with the growth in popularity of EVs and the end of road tax. Pay-as-you-go taxation? Fleets don't agree.

He also looks at government pressure to mandate the inter-operability of EV charge point networks.

Our new issue also outlines how the Optimise Prime programme will offer guidance to fleets and electricity networks to speed up the transition to EVs.

Our spotlight falls on Volkswagen UK and its head of fleet Nick O'Neil outlines the company's plans to become much more than a provider of cars, moving into mobility services.

It's also time to enter the awards. We give the six benefits of doing so, from improved financial performance to increased customer awareness of what your company has to offer.

We have first drives of the Mazda MX-30 and Audi A3 TFSIe.

And in the Commercial Fleet section Coca-Cola hopes to lodge a Supreme Court appeal against the HMRC decision last year that vans the multi-national uses should be treated as cars for tax purposes.

* The March issue of Fleet News will be available in print and as an ezine.