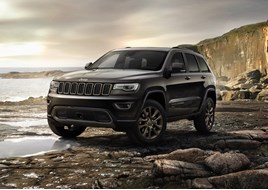 A raft of enhancements to the Jeep Grand Cherokee range of SUV vehicles have been announced for 2016/17.

To celebrate brand’s 75th birthday, Jeep has also revealed details of a 75th Anniversary limited edition Grand Cherokee for the UK. The car was first revealed at the Geneva Motor Show in March.

The latest, model year Grand Cherokee now has a new Start/Stop function and electric steering which helps to achieve a 14g reduction in CO2 (to 184g/km), compared with the previous model year. Fuel economy has also been improved to 40.4 mpg on diesel versions.

A range of new exterior colours have been added to complement the striking design: Velvet Red, Redline and Ivory Tri-Coat, while acoustic glass improves the cabin experience.

Inside, a new, gear lever replaces the current aircraft-style e-shift, and a revised centre stack includes Sport and Start/Stop buttons.

Safety features include a ‘Stop’ function up to 7mph on the Rear Park Assist, and full speed forward collision warning.

The Grand Cherokee 75th Anniversary version will be limited to just 125 examples in the UK. It will be based on the MY16 platform and powered by the same 3.0-litre V6 MultiJet 250 hp engine paired with the eight-speed automatic transmission.

Four colours will be available for the new 75th Anniversary car in the UK: exclusive Recon Green, Bright White, Brilliant Black and Granite.

The new, high performance SRT Night version is even more limited in number - just 30 will be available for sale in the UK, with first units ready this month (July).

This limited edition SRT Night version of the fastest and most powerful Jeep ever; covering 0-60 mph in under five seconds, thanks to its 6.4-litre V8 petrol engine delivering 468 bhp and 624 nm of torque.