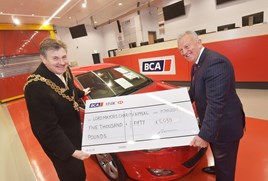 The day’s events included a special sale of vehicles that attracted a large crowd of buyers to BCA Birmingham - Perry Barr and the sale of a charity car donated by BCA with all the proceeds going to the Lord Mayor’s Charity Appeal.

Rice watched from the Rostrum as a car donated by BCA was sold to raise funds for the Lord Mayor’s Charity Appeal 2016/17, which supports a number of charities including Cancer Research UK and Fischer House UK.  The 2012 Vauxhall Astra sold for an £5,050 and was purchased by Trade Centre UK, which is soon to open a new 12 acre, 1,200 car site in the West Midlands.