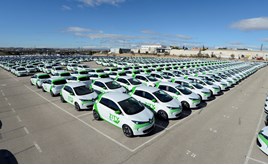 A fleet of 500 all-electric Renault Zoe will be arriving in Madrid this month in a car-share scheme to cut pollution in the city.

This new car-sharing scheme covers a wide area of the Spanish capital, with vehicles provided to customers in the right place at the right time via an efficient smartphone application.

Madrid reportedly has the “highest rate of daily car-sharing in Europe” due to the city’s size, population, traffic problems and air pollution issues.

The scheme arose when Madrid’s ‘hyper-centre’ announced it would permanently ban internal combustion engine vehicles in June 2018, leading to Renault and Ferrovial signing an agreement in August.

The car-share Zoe’s will benefit from RideCell technology with a smartphone connection completed by a bluetooth link.

That means the vehicle can be contacted even in places where connectivity is poor, such as underground car parks, and the time taken for the vehicles to respond to smartphone instructions sent by customers is reduced.

250-mile range Renault Zoe on sale in the UK now

A new version of the pure-electric Renault Zoe with a range of 250 miles will go on sale it the UK in November after it was unveiled at the Paris motor show.