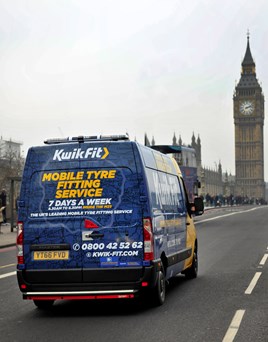 Kwik Fit has announced a renewed three-year contract to exclusively supply a range of tyre-related services to British Gas.

The sole supply contract is one of Kwik Fit’s largest to an end-user fleet and has been regained after a 10-year partnership was interrupted three years ago.

Critical to Kwik Fit regaining the business was its nationwide mobile tyre fitting service with British Gas, focused on ensuring vehicle downtime is kept to an absolute minimum.

Kwik Fit operates a 200-strong centrally-managed mobile fleet and its ‘Mobile7’ operation launched inside the M25 last year has now been extended to cover other regions such as the West Midlands and North West.

British Gas previously enjoyed a long-time partnership with Kwik Fit, but in 2014 made the switch to another provider. Kwik Fit’s mobile service was a “key reason” for British Gas making the decision to return.

“Winning the new contract was a team effort and British Gas detected Kwik Fit’s hunger to win the contract during the negotiations.

“Now, following implementation, we will continue the momentum and deliver on our commitment to provide a first-class level of service and exceed key performance indicators laid down by a high-profile customer.”

In the spotlight: Kwik Fit

Kwik Fit fleet sales director outlines the strategy as the company develops from tyres-only to a more comprehensive SMR service.

Kwik Fit is taking part in Brake’s road safety event, Speed Down Save Lives, for Road Safety Week during November 20-26.