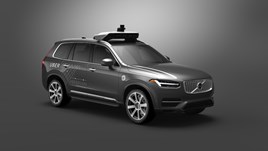 Uber has halted self-driving car trials in four cities in North America after a 49-year-old woman was killed.

Elaine Herzberg was struck by the car when crossing the road in Tempe, a city east of Phoenix. Police said she was taken to a local hospital, where she died.

Dara Khosrowshahi, Uber’s chief executive officer, said on Twitter that the death was "incredibly sad news". He added: "We're thinking of the victim's family as we work with local law enforcement to understand what happened," he said in a tweet.

Autonomous cars have been involved in incidents before, but this is thought to be the first time a collision has resulted in the death of a pedestrian.

An incident involving an Uber self-driving car a year ago, when an Uber test car ended up on its side in Tempe, led to the trials being suspended for a few days, before being reinstated.

Evgeny Chereshnev, CEO at technology company Biolink.Tech, said: "At the moment, the autonomous vehicles we have already – such as airport trains and the Docklands Light Railway in the UK – thankfully work hazard free because the journeys are simple and predictable.

“Statistically, there is very little risk of anything going wrong because they’re programmed to only go from A to B. Even with other forms of partly automated transport, such as planes and ships, there is still always a human there to monitor them.

“However, on roads, autonomous cars have the potential to be compromised almost 100% of the time. There are many factors that bring significant risk to the use of autonomous cars, all of which are from external sources such as other human drivers, pedestrians, cyclists and even sudden extreme weather changes.

“Unless all cars on the road are autonomous, sadly there is the potential for more people to be injured or worse. That being said, I think it’s important not to kill the initiative of autonomous cars.

“Any risk of road accident by self-driving cars will be significantly less than the current number of road accidents – which is reported to be a staggering 1.25 million per year.

“Unfortunately, unless we have fully controlled environments on the roads, accidents can and will continue to happen."

The US National Highway Traffic Safety Administration and the National Transportation Safety Board said they were sending teams to Tempe to investigate the crash.

Volvo and Uber are joining forces to develop the next-generation of autonomous driving cars, in a £228 million project.

Volvo has signed a framework agreement with Uber to sell tens of thousands of autonomous driving-compatible base vehicles between 2019 and 2021.