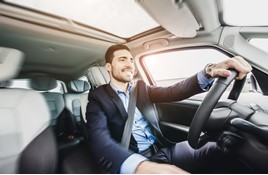 New fleet research from Skoda estimates that company car drivers spend the equivalent of nearly three years of their working life in the driver’s seat.

The survey commissioned by Skoda polled 1,000 company car drivers and the research revealed that the average employee will spend over two and a half hours in their car on a typical working day. That works out at 13 hours a week or 26 days every year. Over a standard 40-year career (age 25-65) this equates to two years and nine months on the road.

The survey highlighted that company cars are being utilised to the full, with the average driver travelling 235 miles a week or nearly half a million miles (451,200) over the course of their career – the equivalent of driving around the Earth more than 18 times.

A typical company car driver will also lose their temper 307 times a year, make 355 hands-free calls to their boss and drink 614 teas or coffees – all from the comfort of their car.

Each week, as many as five business deals will be clinched while in the car, six sandwiches will be eaten and an average of six work-related texts will be sent while on a roadside break. Drivers will rely on their sat-nav eight times a week and make their way through six packets of crisps.

Henry Williams, Skoda UK head of fleet, said: “Every year we conduct research into the wants, needs and habits of our company car drivers; the results of which influence the specialist business car range we offer. We know consumer requirements are evolving all the time so our research ensures our cars are always relevant for the driver.

“The car is more than just a vehicle. For many, it’s a mobile office, so technology such as Apple CarPlay and Android Auto, Wi-Fi-hotspot and an infotainment system that keeps you up to date with the latest news channels, weather and fuel prices are as much as necessity as a nice to have.”

The research found nearly two-thirds of company car owners said they felt like they spent more time in their vehicle than they do sat at home on their sofa, and 52% went further to comment that they felt they spent their life in the car. That said, a third (33%), said that they really enjoyed driving.

A fifth of company car drivers relish their time in the car stating it’s the only ‘me time’ they get to themselves and 71% prefer to drive without any passengers, with 43% saying it gives them time to think about work and make plans in their head.

Lighter mornings brought on by the clock change could make motorists speed, and changes in driver behaviour could impact fleets.

Skoda boosts specification of Superb and adds SportLine Plus trim

Skoda has added extra standard equipment to the Superb range and launched a new Sportline Plus trim level.

The dire state of British roads has led to 85% of drivers fearing for the safety of themselves and other road users, according to new research from AA Cars.