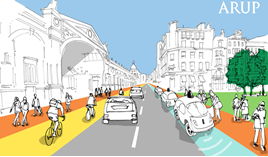 A new project is under way to test how a changeable system of kerbside markings could prepare the UK’s road network for the future needs of connected and autonomous vehicles (CAVs).

Arup, an independent firm of designers, planners and engineers, is one of five companies each awarded £30,000 to test their ideas as part of the National Infrastructure Commission’s Roads for the Future competition.

The winning project will be given an additional £50,000 in funding to further develop the idea.

Arup explained to Fleet News that, over the course of a day, what it calls a FlexKerb segment could function as an autonomous vehicle rank in rush hours, a cycle path at lunchtime, a pedestrian plaza in the evening and a loading zone overnight.

FlexKerb, it said, will use real-time data from traffic and air quality information to adjust kerbside uses throughout the day and week.

It is unclear at this stage how the unpredictable nature of a system changing at the whims of the city would affect motorists looking for a parking space or cyclists wanting a dedicated cycle route.

This is something Arup acknowledges. Its spokesperson said: “There are challenges the next stage of the submission will look at. For example, if access to a street changes in a dynamic way, how will sat-navs and other navigation devices cope? There is a lot to think about and explore further.”

The Arup team now has three months to develop a feasibility study to demonstrate how it could benefit cities once CAVs are introduced, using the funding to simulate the scheme on a typical London high street.

This will include an illustrative FlexKerb schedule, using traffic modelling software, for one weekday and one weekend day to show how flexible use of a busy street’s kerbside can enable CAV pick-up and drop-off alongside pedestrians, cyclists and other transport users.

Given the feasibility study is yet to be completed, Arup can’t give exact details on how FlexKerb would be implemented.

However, the spokesperson said it is likely to be a mixture of physical and digital infrastructure, including LED displays and smart bollards, to indicate changes on the kerbside.

He said: “This submission aims to ensure that pavements continue to benefit all street users. This includes people walking, cycling and using public transport, as well as those travelling in CAVs or by taxi and car – and also freight – by giving priority to different users at different times of the day and between weekdays and weekends.

“There is also potential that it could also help the shops and businesses on our busy high streets, by identifying optimum delivery and loading times and by encouraging footfall and people to dwell.”

FlexKerb would also respond to real-time air quality issues by closing off vehicular traffic as a potential response. FlexKerbs could also give priority to ultra-low emission vehicles as a way to boost adoption.

Launched in January with Highways England and Innovate UK, Roads for the Future sought ideas for preparing the road network for the growth of connected and autonomous vehicles.

The commission received 81 entries in total before choosing five to progress.

The four other Roads for the Future projects include a scheme from AECOM, which examines how smart signals could advise drivers and vehicles on speed to improve traffic flow. The concept will be tested using a simulation model of the A59 in York.

Leeds City Council is also looking at how data generated from digitally connected cars could be used to improve traffic light systems, allowing highway authorities to better manage traffic on their roads and reduce tailbacks. The team will use models of roads across Leeds to test this.

The other two schemes are from City Science, which is examining how existing roads could be dedicated to driverless cars in Exeter, and Immense, which is looking at how artificial intelligence could help sat-navs to learn better routes to avoid congestion in Oxfordshire.

Chairman of the National Infrastructure Commission Sir John Armitt said: “We can see for ourselves the progress in developing cars for the future, with trials of driverless cars taking place across the country – we now need to make sure the technology on our roads keeps up.”

The Volkswagen Group has announced a strategic partnership with technology company Aurora to bring self-driving electric vehicles to cities as mobility-as-a-service (MaaS) fleets.

The Government is inviting companies to bid for a share of £30 million funding to support the development of self-driving vehicles on UK roads.