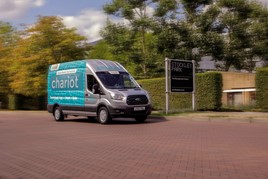 Chariot began operating in London earlier this year, providing a minibus service that connects commuters living and working in areas underserved by public transport with nearby transit hubs.

Now, it is beginning to serve companies and out-of-town campuses where access by public transport can be difficult.

“Companies know that a good daily commute can make a real difference to their employees’ quality of life – and the quality of their work,” said Sarah-Jayne Williams, Ford’s director for Smart Mobility in Europe. “With Chariot we’re providing a comfortable, modern and efficient transport service that we think will benefit staff, their employers and – by helping to reduce traffic – the city around them.”

The first new Chariot route is a collaboration between Chariot and easitNETWORK. The service is available for commuters travelling between Stockley Park – near to Heathrow Airport on the outskirts of west London – and Hayes and Harlington Station, a major transport hub served by TfL Rail, National Rail and, from next year, the new Elizabeth Line.

One of Europe’s premier business parks, the 150-acre Stockley Park campus accommodates more than 7,500 employees from a variety of major businesses including IBM, Apple and BP.

The free shuttle bus operates during weekday morning and afternoon peak times, taking a direct route between Hayes and Harlington station and the Stockley Park campus.

A further service connects Stockley Park and the nearby Intu Uxbridge Shopping Centre.

Chariot offers a smartphone app that lets bus users book a seat and track their vehicle’s progress in real time.