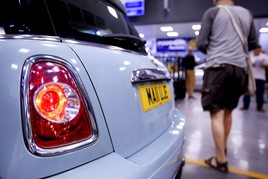 Demand for used cars has remained high in October, with strong residual values for ex-fleet vehicles.

The used car market outperformed new in October, as data released by Cox Automotive signals another positive month for dealers.

Dealers continue to focus on used cars as WLTP emissions testing continues to impact the supply of new cars.

In the wholesale market, Manheim reported a leap in the volume of vehicles coming through its auction lanes, up 6.3% from September.

Meanwhile NextGear Capital reported steady figures across the board, with the average cost per unit decreasing just 0.07% to £7,697 - while average holding days remained steady month-on-month.

The new car market fell 2.9% in October, as model changes and backlogs caused by WLTP emissions testing continued to cause shortages. Declines were seen in both private and fleet sectors, with registrations down 1% and 5.2% respectively.

Philip Nothard, customer insight and strategy director - Cars at Cox Automotive, said: “The SMMT figures released this week demonstrate the continued pressures on the new market. As predicted, WLTP continues to impact the supply of new cars to dealers, and while the demand for hybrid and plug-in vehicles looks strong, the figures are behind Government ambitions.

“In contrast, the used market continues to gain pace. Volume across our wholesale auctions rose steadily throughout October, and good quality, ready to retail product continued to sell well.”

“Retail part-exchanges have performed well, and the corporate and fleet market have also achieved strong prices in the direct supply market.

“As we move into 2019, the uncertainty around Brexit will undoubtedly begin to loom even larger, but with the used car market in its strongest position for many years, we believe we are well placed to ride any storms that may come along.”