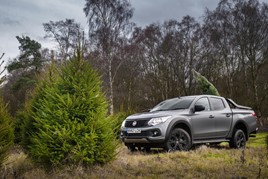 Fiat Professional has warned British drivers they could face three penalty points and an unlimited fine if their Christmas tree isn’t loaded correctly.

The survey by Fiat Professional found that three quarters of British motorists have little or no idea about the laws for safely transporting Christmas trees.

Only 25% of the 500 British adults surveyed say they know the rules regarding transporting Christmas trees safely on the road.

And while there is no specific mention of the festive firs in the Highway Code, there is a section about loading your vehicle correctly and safely, which is appropriate at Yule time.

A Driver and Vehicle Standards Agency spokesman said: “A dangerously loaded vehicle will incur an instant three penalty points on your licence, along with an uncapped fine.” Which could see drivers facing a bill of thousands of pounds.

Around 6% of drivers admit they have previously transported a tree in a manner which ‘may have contravened the rules of the road’ by leaving the tree hanging out of their vehicle, while an astonishing 25% admit to just ‘throwing it in the car’ and not securing it.

A further 5% carry the tree home on the roof of their car, irrespective of whether or not they have a roof rack, securing it with rope or ratchet straps.

Where the tree is longer than the vehicle, the Highway Code clearly states that the overhanging load should feature a reflective flag to warn other motorists, while it mustn’t obscure the driver’s vision of the road.

Fleets are being advised by FleetCheck to warn their drivers over the Christmas break about the poor accuracy of cheap personal breathalysers.