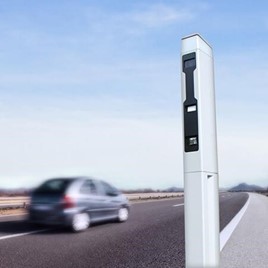 New research conducted for RAC Europe found that only 14% of drivers are aware of the new Mesta Fusion cameras, which can even spot drivers using their phone illegally.

RAC Europe spokesman Rod Dennis said: “With thousands of UK drivers taking their own cars – and motorbikes – to France in the coming weeks, it can be easy to forget that certain driving conventions can be quite different to those this side of the Channel.”

The new devices can see across eight lanes of traffic, monitor several vehicles at once, and tell the difference between cars and HGVs.

As well as catching speeders, the cameras have the ability to take note of drivers or passengers who are not wearing seat belts, capture illegal overtaking and dangerous driving practices such as tailgating, running a red light, and driving in a prohibited lane or area.

For every operational camera, there will be four decoy options, and they can switch places without drivers realising, making them almost impossible for drivers to avoid.

Initially the cameras will only be used to catch those breaking the speed limit.

Six-in-10 drivers surveyed by the RAC who take their own cars or motorbikes abroad (63%) were not aware tailgating is illegal in France, as it is in the UK, while half (49%) did not know that the only legal way of using a handheld mobile phone in the country is to park up in a designated parking place and switch the engine off.

Only half of drivers (49%) know they have to pay a mandatory recovery fee should they break down on a French motorway, with just one in six of these (15%) aware that the fee has gone up to at least €126 per breakdown this year – a cost which rises overnight and during weekends.

Depending on their breakdown provider and level of cover, drivers can claim this fee back once they are back in the UK.

Order recently introduced vehicle emissions stickers as soon as possible after it took six weeks for one to reach the UK.

Four out of five motorists say average speed cameras are more effective than traditional cameras that catch speeding drivers in one location, says the RAC.