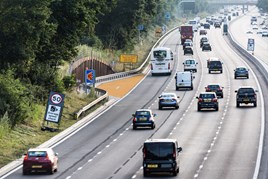 The number of people killed on Smart Motorways has reached 38 in just five years, a BBC Panorama investigation has uncovered.

Smart Motorways have received widespread criticism from road safety groups since their inception because they do not have a hard shoulder.

There has been a 20-fold increase in the number of near-misses – an incident with the potential to cause injury or ill health - on just one section of the M25, since the hard shoulder was removed.

Transport Secretary Grant Shapps told BBC Panorama he wants to fix smart motorways because they are “too confusing for drivers”.

The result of a Government review into Smart Motorways is due shortly. It is expected that reforms will include a radar-based car detection system, which can spot stranded vehicles immediately.

RAC head of roads policy Nicholas Lyes said: “A commitment to install stopped vehicle detection technology on the whole smart motorway network would be a welcome step and something the RAC has called for consistently in recent years.”

RAC research suggests that more than two-thirds of drivers believe that permanently removing the hard shoulder compromises safety in the event of a breakdown.

“Simply ploughing on with the status quo regardless isn’t an option anymore,” added Lyes. “However, three years to install this across the network is a long time to wait and questions must be asked as to why this hasn’t already been rolled out universally to date. In the meantime, we would suggest Highways England gives consideration to installing extra cameras to help pick up vehicles in trouble on live lanes to help mitigate for the delay. It is vital that drivers have confidence in the road infrastructure that they are using.”

“In addition to this, we have long said the distance between SOS areas was too big so we would welcome a commitment to install more to increase the chances of vehicles being able to reach one in the event of a breakdown and a widescale public information campaign.”

Joshua Harris, director of campaigns for Brake, said: “The number of deaths on smart motorways, and the huge increase in near misses reported on the M25, is a serious cause for concern. Safety, not traffic flow, must always be the priority on our roads and unless smart motorways are proven to be at least as safe or safer than regular motorways there should be an immediate u-turn on their rollout. Every road death and serious injury is a preventable tragedy and we should be introducing roads that save lives, not ones that further endanger the people who use them.”

An increase in the number of smart motorways, which rely on advanced traffic management (ATM) cameras, could give fleets a compliance problem.

Almost one quarter (23%) of drivers have driven in a lane on smart motorway closed by the red ‘X’ sign in the past year, RAC research suggests.

Is this the end for Smart Motorways?

The future of Smart Motorways could be short lived as Transport Secretary Grant Shapps has called for a review into their safety.