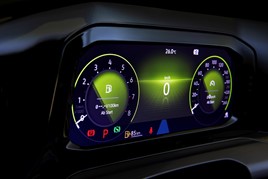 Historic methods of speedometer calibration do not work for new vehicles with digital instrument clusters, making them unsuitable for police use.

RSS developed the new method for calibrating digital what involves measuring the performance of the speedometer gauge, establishing its inaccuracy and providing correction figures to the readings of that gauge, without the need for removing the speedometer.

This process is quicker and simpler than the traditional process of calibrating analogue speedometers, saving time and money while maintaining the integrity and warranty of the vehicle.

The method has already been used to calibrate the digital speedometer of a South Wales Police patrol car.

Inspector Gareth Morgan, of the South Wales Police Western Roads Policing Unit, said: “In my opinion, the work carried out by RSS has transformed a vehicle that, although ideally suited to the RPU role, was not fit for purpose, due to the lack of a calibrated speedometer.

“Due to the new digital type displays, our traditional solution was not an option, and we had to consider other options.”

When the force discovered that the Seat Leon had a digital speedometer fitted, it was feared that the car would not be fit for purpose, as there was no apparent calibration option. Early disposal of the vehicle was a consideration.

Traditionally, analogue speedometers were removed from the police vehicle and adjusted to read an accurate or close to true speed, as part of the calibration process.

But many modern vehicles now have digital speedometers that cannot be adjusted without compromising the vehicle.

But the force was made aware of the RSS calibration method and the process was quickly carried out. The force has been driving the vehicle successfully ever since.

Steve Callaghan, calibration laboratory manager of Road Safety Support, said: “The work we have been doing in calibrating speedmeters for Home Office Type Approval in our accredited laboratory has been developed to deliver this answer to the police that has perplexed suppliers and fleet managers.

“In developing this solution we have not only been able to calibrate the speedometer gauge, as has been done in the past; we calibrate the entire speed sensing and display in each vehicle.”

Police chief call for zero tolerance on speeding ‘not achievable’

The National Police Chiefs Council (NPCC) is playing down suggestions from its roads policing lead that drivers could be fined for breaking the speed limit by just 1mph.

One in five police vehicles to be pure electric