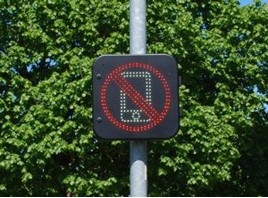 The system, developed by Westcotec, comprises a sensor capable of detecting vehicles where there are active 2G, 3G and 4G phone signals, and an LED warning sign located a short distance along the road.

As long as the activation meets certain pre-determined parameters, the sensor will pick up that a driver is using a phone for calling, text or data purposes and will activate the warning sign. This shows an illuminated mobile phone icon within a bright red circle and diagonal red line.

The device is purely about education, warning drivers and being able to identify when the driver was on the phone. It is the first such system to have a direct interaction with a mobile phone offender.

The technology can detect if a driver is using Bluetooth, and will therefore not trigger the warning sign. However, the manufacturer accepts that some activations might be triggered by non-driving occupants.

Norfolk County Council was the first to trial the road signs last year, but this is the first time that the police has decided to deploy the technology.

The forces say the two detectors, which cost £6,000 each, will be located on the A34 in Oxfordshire but will be posted at different locations throughout the Thames Valley and Hampshire to start - but more could be rolled out.

Matt Barber, deputy police and crime commissioner for Thames Valley, told the BBC that the system was "not fool-proof", but said that the police needed to "make it as socially unacceptable to use your mobile whilst driving as it is to drink and drive".

PC Liz Johnson, a roads safety officer, said research suggested a driver was four times more likely to crash if they were using a phone and twice as likely to be involved in a fatal collision when texting compared with drink-driving.

"It is vital that people take notice and stop using their mobile phones whilst driving," she added.

Drivers caught using a mobile phone while driving are currently fined £200 and given six points on their licence.

Norfolk County Council is trialling road signs that detect when drivers are using a mobile phone.

Handheld mobile phone use at the wheel ‘getting worse’

Younger working-age drivers and those in London the worst offenders, as RAC warns of ‘fading impact’ of penalties introduced in 2017.