One in five police vehicles to be pure electric 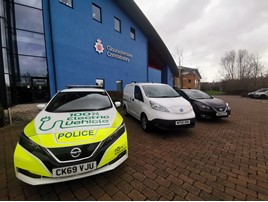 The new cars and vans, supplied by Nissan, reflect a commitment by Gloucestershire’s Police and Crime Commissioner, Martin Surl, to ensure the force operates in a way which is as responsible and sustainable as possible.

While none of the vehicles will be used as response vehicles, the majority will be used by local investigation teams to help deliver savings of almost 190 tonnes of CO2 per year.

Eleven of the vehicles will be fully marked up as traditional police cars with ‘zero emission’ labelling.

The force expects estimated savings from the switch to EVs of some £138,000 per year as a result of decreased fuel costs and savings to servicing, in comparison to diesel vehicles.

Nissan Motor GB fleet director, Peter McDonald, said: “We are really excited to be working with progressive organisations in their pursuit of net zero.

"We are working with a number of organisations piloting major initiatives in the corporate and public sector space, and are really excited to announce this partnership with the Gloucester Police Force.

“Through their pioneering work, Gloucestershire is showing how EVs can be used in all kinds of practical applications, and how with some initiative blue light fleets are able to play an active role in decarbonisation.

"We applaud Gloucester Police Force and are proud to be working with them.”

Gloucestershire claims its large EV police fleet is outnumbered only by the Metropolitan Police, which has 546 eco-vehicles in its fleet – a figure achieved through a combination of hybrid, hydrogen fuel cell and fully-electric vehicles.

Surl said: “The purchase of these new vehicles is a huge step forward for the constabulary to reduce its carbon and pollution, and meets part of my commitment to ‘A Green and Pleasant County’ that was outlined in my Police and Crime Plan.

“It’s a journey we’ve been on for five years and is part of a long-term commitment by my office to ensure our environment is considered at every opportunity.

“The new fleet will save a considerable amount of CO2 and money, giving Gloucestershire a larger percentage of fully-electric vehicles in its fleet than any other force.

“I hope the constabulary will be able to build on this great work, and extend its electric fleet to 40% within the next four years.”

Tim Anderson, head of transport at Energy Saving Trust, congratulated Gloucestershire Constabulary on switching one in five vehicles to fully electric. He said: "This is a great achievement and an important example leading the way for other forces proving that even in fleets requiring a high level of operational resilience, electric vehicles can work.

“Energy Saving Trust has supported several police forces on their journey towards electrification and can provide a funded fleet review to organisations to assist with the business case for electric vehicles.”

Gloucestershire Constabulary expects the delivery of 65 pure electric cars and 10 fully-electric vans in its fleet by the end of April 2020. More than half have already been delivered.

Furthermore, 44 additional charge points have been fitted around various Police buildings in Gloucestershire.