New data from the DVLA shows that 92,000 drivers are at risk of losing their licence, with a further three points pushing them over the 12-point ban threshold.

The figures, obtained via a Freedom of Information request by IAM RoadSmart, reveal that there are 80,484 motorists in the UK with nine points on their licence, 7,804 with 10 points and 4,313 with 11 points.

There are also almost 8,800 drivers with 12 points or more on their licence.

Reasons that these drivers can keep their licence include exceptional hardship, such as loss of employment.

Neil Greig, director of policy and research at the road safety charity, said: “The number of motorists still driving on UK roads with more than 12 points, or just under the driving ban threshold, is alarming.”

Further data from the DVLA highlighted the postcode areas with the highest number of drivers with penalty points. These include Birmingham with 74,397, Sheffield with 56,876 and Nottingham with 56,245.

Previous research by IAM RoadSmart has revealed that more than 304,000 pensioners (over 65s) have penalty points on their driving licence, which is almost 25 times the number of young teenage drivers.

It was also revealed that the oldest person driving with points on their licence was 102, while there are more than 3,000 people over the age of 90 currently driving with penalty points.

The road safety charity says that many drivers may be unaware that a lack of basic vehicle maintenance could also land you with points – such as defective tyres, blown headlight or brake light bulbs, cracked light covers, smeary windscreen wipers or worn suspension components.

Greig says the new data provides an “opportune” moment to educate motorists on some motoring laws that can result in points, so that drivers carry out regular basic checks of their vehicle to “help make the roads safer for all users”. 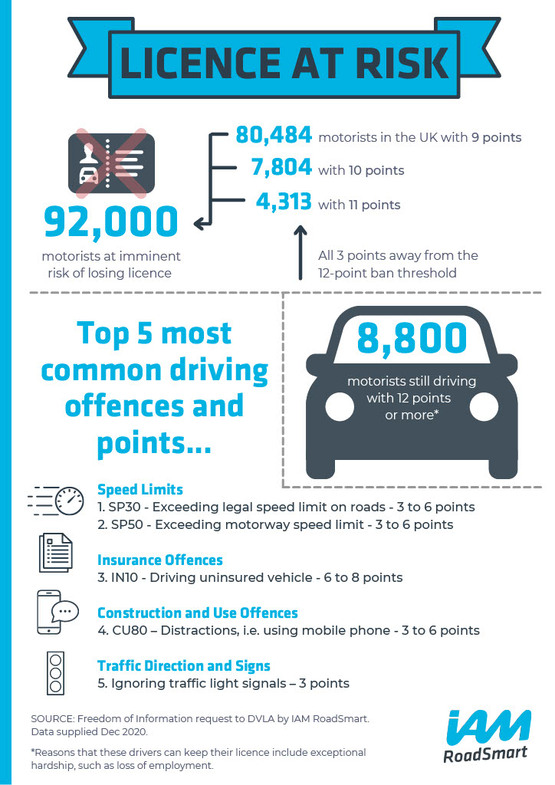 Licence Check is warning fleet operators many drivers will need to renew permissions to access licence details with the DVLA.

Licence Check has launched a new text message-based method of driver authorisation in its DAVIS driver and vehicle risk platform.