Used car sales in the UK fell 8.9% in the first quarter of 2021 compared to the same period last year, figures from the Society of Motor Manufacturers and Traders show.

The market showed signs of recovery in March  with a 32.2% year-on-year increase, although this compares with a week March 2020, when the UK entered its first lockdown.

Mike Hawes, chief executive of SMMT, said: “These figures lay bare the turbulent impact of coronavirus lockdowns on the used car market and, while March’s performance suggests there is some pent-up demand, this is against a weak month last year, so it’s true extent remains to be seen.

“The second quarter will see significant growth as last year’s April and May markets were severely limited by lockdown measures.

“With car showrooms open again and the UK coming out of Covid restrictions, the sector can look forward with renewed optimism.”

Last month Cap HPI reported the largest increase in values seen in 12 years, with an overall increase of 2% at the three-year point during April, and warned demand could outstrip supply.

However, the combined number of plug-in vehicles traded represented only 1% of the market, up from 0.7% in Q1 2020.

Luxury saloons and specialist sports were the only segments to see growth, up 10.3% and 5.4% respectively, with transactions in the mini segment falling the most, down -18.3%. Superminis (31.4% share) were by far the most popular used buy, followed by lower medium (27.2%) and dual purpose (13.1%).

Together these accounted for more than seven in 10 (71.7%) of all cars finding new owners.

Karen Hilton, chief commercial officer at Heycar, suggests that it is owners with vehicles between six and eight years old who are most likely to buy.

“They are the people who have most used our free valuation tool during Q1 - making up over a quarter of enquiries," she said. "They are closely followed by owners of vehicles between three and five years old and nine and eleven years old who make up around a fifth of visits respectively.

“At the same time over half of valued cars that were later added to heycar in Q1 were in the 3-5 year old category, suggesting those who extended finance agreements through Covid are now sufficiently confident to make a new purchase."

Heycar data shows that diesel vehicles continue to perform strongly against expectation. Average prices are now up by 16.5% since January 2020, with petrol increasing by 2%.

“It suggests there is a significant portion of car-buyers who may be looking for one last hurrah with diesel before they make the switch to EV or petrol-hybrid," continued Hilton. “Average lead prices for diesel convertibles, for example, have increased by 36% since the pandemic with SUVs up by 12.2%." 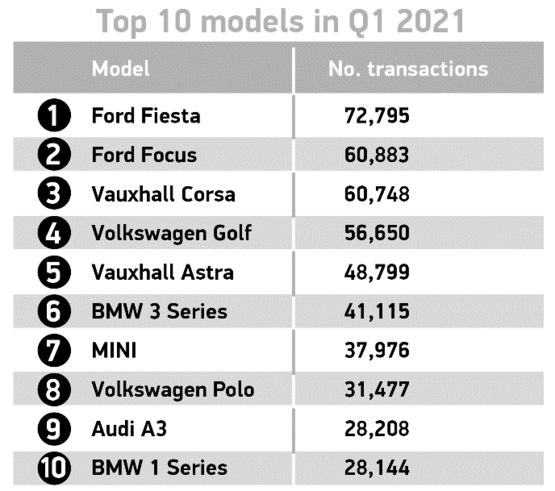 The used car market is booming, with Cap HPI reporting the largest increase in values seen in 12 years.