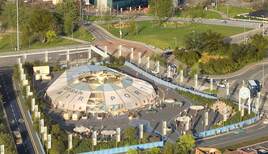 A programme to develop infrastructure for autonomous logistics drones and air taxis has received backing from the UK Government.

The Air-One project, the first of an estimated 200 Urban-Air Port hubs worldwide, is set to launch in Coventry this year for future air taxis, drones and ground-based electric transport, such as cars, e-bikes and e-scooters.

Kwasi Kwarteng, secretary of state for the Department of Business, Energy and Industrial Strategy (BEIS), said: “Cleaner, inter-city flight technology is vital not only to reducing emissions, but to better connecting remote communities, from small towns in the UK to isolated settlements all around the world.

“As we build back greener from the pandemic, initiatives like the government-backed Air-One project will help us develop the infrastructure needed to make our dreams of flying taxis a reality.”

The Government said it is supporting the development of urban air mobility to provide zero-carbon transport connectivity across the UK.

Last year, the Government launched a consultation to investigate the use of micromobility vehicles, flexible bus services and mobility as a service (MaaS).

The first eVTOLs are expected to be commercialised in the next three to five years.

Hyundai, a partner of Urban-Air Port, is one of several companies developing an eVTOL passenger vehicle. Hyundai’s vehicles are set to be commercialised by 2028.

In April, UPS announced a deal to purchase 150 eVTOL vehicles, for delivery in 2024, to cut delivery times and access smaller markets.

"In remote locations, it is either non-existent or over-priced, leaving many isolated and increasing economic disparity. But to fix this, we still look to siloed and ancient road and rail infrastructure.

“New innovations mean we can now reimagine transport to perfectly meet the needs of people and provide a cohesive, sustainable and reliable experience.

"Our Air Architecture can unlock clean and beautiful cities and connect the world in new ways – in the air and on the ground – bringing economic prosperity, cutting emissions, and improving quality of life.

“This is a real British innovation success story – the UK can lead the world in accelerating this transport revolution.”

Funding of up to £300 million has been announced to develop a range of new technologies, including flying taxis and freight-carrying drones.

Government to trial drones and e-scooters in £90m transport review

The government has launched a consultation to investigate the use of micromobility vehicles, flexible bus services and mobility as a service (MaaS).