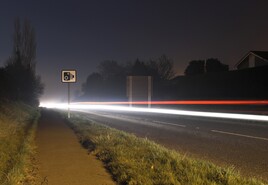 Free flowing traffic conditions resulted in 56% of cars exceeding the speed limit on 30mph roads compared to 53% on motorways in 2020, according to new statistics from the Department for Transport (DfT).

More than one 10 (12%) were speeding on national speed limit single carriageway roads.

Compared to pre Covid-19 and lockdown conditions, in 2019, 54% of cars exceeded the speed limit on 30mph roads, while half (50%) were speeding on motorways and 9% on national speed limit single carriageway roads, according to IAM RoadSmart.

While cars (55%), vans (55%) and motorcycles (58%) were the worst offenders on motorways, larger vehicles, HGVs and buses scored the highest on national speed limit single carriageways.

Neil Greig, IAM RoadSmart director of policy and research, said “It is worrying that one in two drivers on motorways and 30mph roads exceeded the speed limit in 2020 when they were given greater opportunity.

“The increases are not as marked as we might have expected, particularly on rural 60mph roads, so there is some positive news here that many drivers can still be influenced and help us all ‘build back safer’.

“Getting back on track will require greater investment in roads policing but for now the goal of making speeding as anti-social as drink driving looks far from being achieved.”

The report also showed figures for ‘20mph roads with no traffic calming’, which Greig says are still far too high (87% exceed the limit), indicating an urgent need for more investment in changing road character and environment to reinforce understanding of posted limits.

He continued “Due to Covid-19 and the national lockdown in Great Britain over four months of restrictions resulted in more free flowing traffic conditions in 2020.

“While restrictions have continued in 2021 with Freedom Day around the corner all vehicles will need to adjust to increased ‘normal’ traffic levels and regulate their speed accordingly to improve road safety and avoid fines.”

RAC road safety spokesman Simon Williams said that the figures confirm that there were “shocking levels of speeding” during the first lockdown period in 2020.

“It’s clear that some drivers dangerously took advantage of quieter roads to drive far faster than they would do in normal times,” he added.

“What’s particularly concerning were the levels of non-compliance on 20 and 30mph roads, many of which are in residential areas and close to schools.

“If traffic volumes don’t return to pre-pandemic levels, it would be terrible if the lockdown legacy was an increase in the number of drivers who consistently speed. In short, speed kills and we can only hope that police forces across the country are able to put the resources in place to clamp down on dangerous drivers and help ensure the roads are safe for everyone.”

New research from the RAC shows scale of speeding on UK roads and a desire to see average speed cameras used to enforce those with the highest speed limits.