A majority of drivers (54%) want the 70mph-limit on motorways enforced by average speed cameras, new research from the RAC suggests.

That’s despite more than half of drivers (56%) admitting to breaking the speed limit on motorways, with a third (34%) of those confessing to having travelled at speeds in excess of 80mph.

RAC road safety spokesman Simon Williams says that, despite more than half of drivers admitting to regularly exceeding the 70-mph speed limit, road safety statistics show that motorways are the UK’s safest roads.

However, he added: “With so many motorists admitting to driving much faster than they should on the motorway, it was interesting to see such strong support for average speed cameras to be used more widely to enforce the 70-mph limit as opposed to just in roadworks, as is currently the case.

“We believe drivers see these cameras as being very effective at reducing speeds over longer distances and controlling traffic flow as well as being fairer than fixed position ones as they aren’t instantly punished for a momentary transgression.”

When drivers were asked by the RAC why they broke the speed limit on a motorway, most (39%) said they were following the example set by other motorists, although almost a third (31%) believed they thought it was safe to travel faster than 70mph.

Other common reasons for speeding on a motorway were: nothing else being on the road (28%); the speed limit being inappropriate (27%) and feeling pressure from other drivers behind (26%).

On high speed roads where the speed limit is 60mph and 70mph, more than half (58%) of the 3,000-plus motorists surveyed for the RAC Report on Motoring said they favoured ‘average speed cameras’ which measure speeds between cameras rather than at a single, fixed location like traditional speed cameras.

Nearly a fifth (18%) felt fixed position cameras are most effective while 12% said it was mobile speed traps, with a similar proportion not offering an opinion.

While average speed cameras are used on a number of A-roads, on motorways they are currently only used in sections of roadworks.

More than half of drivers (54%), however, said they would like to see them used in general motorway conditions enforcing the 70mph-limit. Only a quarter (26%) disagreed with this idea, with 18% unsure.

Average speed cameras were also preferred by the majority of drivers for use on 40-50mph limit roads with 46% saying this, compared to 29% for fixed position cameras.

On 20-30mph limit roads however, fixed position cameras came out top with 43% of drivers saying they were best and a quarter (25%) opting for average speed cameras, only just ahead of police officers operating mobile speed traps (21%).

While compliance on roads with lower speed limits is far better than the 54% who admit to exceeding the 70mph-limit, four-in-10 (39%) admit to frequently disobeying 20mph limits. This rises to a third (33%) on 60mph country roads – statistically some of our least safe roads – and to 36% on 30mph urban roads.

In the case of the latter, 45% of those who speed at least occasionally say this is because they believe the limit is ‘inappropriate’ for the area or stretch of road in question.

In separate research, published last year, IAM RoadSmart reported that four out of five drivers (82%) were in favour of using speed cameras to automatically fine drivers travelling more than 10mph over the limit near schools.

Williams said: “Our research shows speed limit compliance on all types of road has improved on previous years, but as our study was carried out during the pandemic we suspect this has partly been brought about by the reduction in the number of journeys carried out for the purposes of commuting – or for other business purposes – where drivers feel greater time pressure and may be more tempted to break the law by speeding.”

Proportion of drivers who frequently or occasionally speed 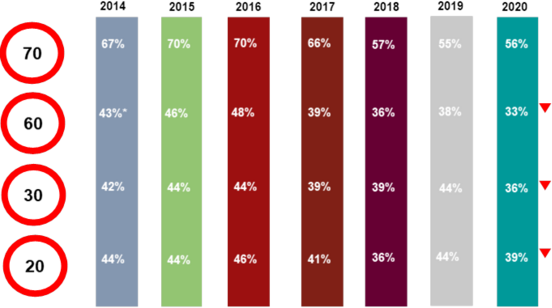 Longer-term trends of speed limit compliance can be found here.