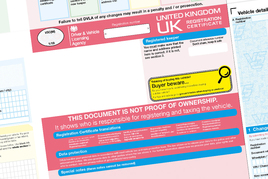 The Driver and Vehicle Licensing Agency (DVLA) has shared some of most unusual reasons people have given for needing a replacement vehicle registration certificate (V5C).

My parrot destroyed it was among the most unusual reasons people shared with DVLA for needing a replacement document.

Other unusual reasons shared with DVLA, include: my child covered their schoolbook with it; I left it at a hotel in the Gobi Desert when driving across Asia during my gap year; and someone bought me a car for my birthday – they wrapped the keys in the V5C and I tore it open without knowing.

One person blamed their grandchildren who had taken their V5C outside and buried it in the mud, while another said it had blown out of the window and when I went to look for it, it was gone.

DVLA launched an online service to get a replacement V5C in September 2020. Motorists can order a replacement no matter the reason and since launch the service has been used more than 300,000 times (around 5,800 times a week).

Julie Lennard, DVLA chief executive, said: “Our online service to replace a V5C is quick and easy to use and means customers will receive their replacement vehicle registration certificate within the week. So whether you misplaced your V5C, it’s being digested by your pet or your kids have used it for arts and crafts - the quickest way to get a replacement is on GOV.UK.”

It costs £25 for a replacement V5C whether you go online or apply by post. The service to replace a lost or damaged V5C on Gov.uk followed the change address on vehicle log book service, launched in June, which has been used more than 1.6 million times.

The new service will reduce the amount of time it takes motorists to receive a new log book from up to six weeks to five working days.