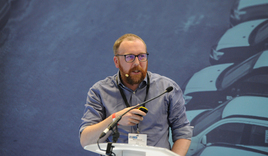 Mark Cracknell, head of connected and automated mobility at Zenzic, told fleet decision-makers at the ‘how connected cars can benefit your fleet’ seminar, that organisations were already looking at how the technology could benefit them.

He said: “A couple of years ago, I was at a fleet conference and I was up straight after a panel discussion on electric vehicles.

“There was lots of cynicism about whether electric vehicles was going to be a thing and I was sat there thinking ‘I'm going to get up and talk about self-driving cars in a minute, and then I'm going to get nowhere’.

“I think we've moved on a little bit since then. There is a future in both the connectivity and the automation, when we think about your fleets.

“Over the past month, we've seen two or three tie ups with major chains, the likes of Ocado, or Wilkinsons, partnering up with technology providers to look at how they might automate their fleets, maybe starting within depots, within warehousing.

“But how do you start to transition vehicles and the goods outside of that? When are we going to get there? It's a question we get asked often.

“At Zenzic, we put together a road map, which covers all sorts of things from legislation, regulation, insurance, public acceptance, technology in the vehicles, the infrastructure, and ultimately how these are going to be used.

“We built this really comprehensive view that says, by 2030, we aspire to see 10s of 1000s of these vehicles out there running services deployed in regions around the UK.

Once registered, watch How connected cars can benefit your fleet

The growth in salary sacrifice and how it can help drive the adoption of electric vehicles (EVs) was examined at this year’s Fleet & Mobility Live.

Video case study: Making the switch to an all-electric fleet

Delegates at this year's Fleet & Mobility Live were given tips on expanding their electric vehicle (EV) fleets with an in-depth case study from OVO Energy.

The crucial role fleets have to play in making a success of the Government’s transport decarbonisation plans was highlighted at this year’s Fleet & Mobility Live.