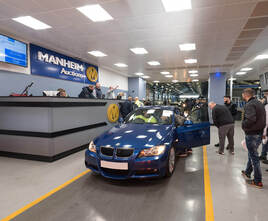 According to Philip Nothard, insight and strategy director at Cox Automotive, wholesale vehicle values will show signs of stabilisation throughout mid-2022 as the market attempts to get back to some form of normality. However, the coronavirus pandemic has rapidly accelerated the online and digital marketplace to what existed two years ago. As a result, it's also entirely possible that a new benchmark for used vehicle values has been reached that may never dip to pre-pandemic levels.

Nothard warns that there is no “tsunami of used stock” on the horizon, and an increased focus on the detail will be required as the shape of the market evolves.

It also can’t be ignored that around 1.4 million new vehicles have been lost from the market, which will never enter the used vehicle parc. Although the impact in the sub-12-month market has been felt already, it will without a doubt have a bearing on the sector for years to come, according to Nothard.

Last month’s average first-time conversion decreased by 6% to 82.9% month-on-month. Similarly, CAP Clean experienced a marginal month-on-month fall of 2%, to 97.3%. This easing resulted in a lowering of both the average age and mileage of vehicles observed through the Manheim lanes.

Nothard said: “While prices have now increased for eight consecutive months, recent signs point towards a potential softening in the market. And while it remains the case that prices overall have continued to rise, the situation is becoming increasingly complex, with some models starting to see significant price decreases. Moreover, some figures we’ve observed are misleading, as it doesn’t represent live market data where many models that saw an increase at the start of the month, which dropped off by the end.

“We expect current market conditions to continue throughout Q1 2022, and it’s entirely possible that we are seeing a revised benchmark for the used vehicle parc.”