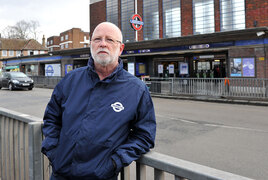 Transport for London (TfL) is fitting speed limiters to a third of its van fleet to reduce the number of incidents involving its drivers.

More than 4,000 workers are authorised to drive the TfL’s 800-strong vehicle fleet, used to transport engineers and equipment to various stations throughout the capital to carry out maintenance work.

Most of this work is carried out at night and speeding incident data analysis found many drivers getting were caught at just over 30 or 40 mph.

It became apparent that drivers were being caught out by TfL’s own efforts to make roads safer with lower speeding limits rather than anything more serious, says fleet compliance manager Tim Dawes.

TfL has committed to reducing speed limits to 20mph on all 220 kilometers of the TfL road network by 2024.

Dawes added: “A lot of the London area is now limited to 20mph. Telematics data showed that many speeding incidents involved drivers travelling around 32mph, so it was clear they were trying to stick to a 30mph limit when, in fact, they were in a 20mph limit.”

One driver unaware of a new, lower speeding limit racked up speeding tickets on the same stretch of road over consecutive nights, Dawes says, adding that the driver "wished he’d had a limiter fitted to his vehicle".

He added: “We’ve retrofitted intelligent speed assistance, provided by a company called Sturdy to 360 of the vehicles. It’s a GPS-based system which limits the vehicles to road’s speed limit.”

The system has an override function should a driver need to intervene, perhaps if a map used by the GPS hasn’t been fully updated.

So far, 330 vehicles have been fitted with the systems and funding permitting, Dawes would like to extend it to the remaining fleet.

The fleet comes under TfL’s Vehicle Logistics department, based in Acton, West London and other vehicles include fire engine-like vehicles and refuse collection trucks.

The full interview with fleet compliance manager Tim Dawes can be found in the February issue of Fleet News.