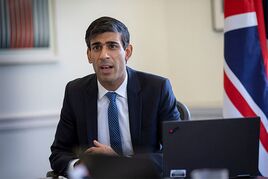 Fleets will get some respite at the pumps thanks to a 5 pence per litre (ppl) cut in fuel duty, which was announced by the Chancellor in the Spring Statement on Wednesday (March 23).

The cut in fuel duty will take effect from 6pm on Wednesday and will last for 12 months.

Fuel duty has been frozen at 57.95 pence per litre since 2011, but with businesses and consumers facing mounting costs the Chancellor, Rishi Sunak, says he hopes that the fuel duty cut will offer some relief.

Ashley Barnett, head of fleet consultancy at Lex Autolease, said: “An electric future simply can’t happen overnight. While rising fuel prices might trigger a switch to an electric vehicle, the affordability of EVs still remains a key barrier towards mass adoption, with an ICE vehicle the only option for many drivers.

"Therefore, as fuel prices continue to soar at an alarming rate, it’s welcoming to see the Government take steps to reduce taxes on fuel and alleviate the pressures that businesses and motorists are continuing to face at the petrol pump.”

Martin Jenkins, CEO of Zenith Commercial and group strategy director, says that the reduction will help fleet operators who have seen the cost of diesel rise by 40% over the past 12 months, with prices 30p per litre more expensive than the start of the year.

However, he said: "Rising fuel costs is just one of many factors that have hit commercial fleets hard recently.

"Operators will need support to navigate the short-term cost pressures as they take the significant leap into zero-emission transport models over the next decade.

"We hope this is just the start of further measures taken by the Government and that the critical role played by commercial fleets will be given due consideration as motoring taxation policy evolves to accompany that transition."

Cut in fuel duty 'not enough'

Around a third (34%) of the pump price for a litre of diesel is made of the wholesale cost, 10% is from the biofuel content, around 6% for delivery and retailer margin, 33% is down to fuel duty and a further 17% from VAT.

A 5% cut to VAT meanwhile – bringing the rate down to 15% from the current 20% -– would have taken almost £4 off the cost of filling a family car with petrol and more than £4 off one that runs on diesel.

RAC head of policy, Nicholas Lyes, said: "The reality is that a 5p cut in duty is something of a drop in the ocean.

"In reality, reducing it by 5p will only take prices back to where they were just over a week ago.

"There’s also a very real risk retailers could just absorb some or all of the duty cut themselves by not lowering their prices. If this proves to be the case it will be dire for drivers. It also wouldn’t be totally unexpected based on the biggest retailers not reducing their prices late last year when the oil price fell sharply.

“Temporarily reducing VAT would have been a more progressive way of helping drivers as the tax is applied at the point the fuel is sold, removing any possibility of retailers taking some of the tax cut themselves to increase their profits."

It’s also the case that the Treasury is benefitting hugely from the high fuel prices because of greater VAT revenue, says Lyes.

"The Chancellor is currently getting 28p a litre VAT on petrol and 30p on diesel – this of course comes on top of fuel duty as VAT is a tax on a tax,” he explained.

Edmund King, AA president, says that he is also concerned that "the benefit will be lost unless retailers pass it on and reflect a fair price at the pumps".

Fleets have faced daily rises at the pumps, with averages hitting new records on most days over the past few weeks and now standing at around 167p per litre for petrol and nearly 179p for diesel.

Diesel has risen by 40% over the past year and average fuel prices reached new record highs on Tuesday (March 22), with petrol topping £1.67 a litre and diesel now poised to exceed £1.80 for the first time ever. The cost of filling an average 55-litre family car with petrol is now more than £92 and nearly £99 for diesel.

He added that diesel was particularly exposed to price rises, with half of the country's diesel imported and a third of these imports coming from Russia.

Meanwhile, Dr Amrita Sen, director of research at Energy Aspects, told the Treasury Committee that petrol prices could rise to around £2.40 a litre and that diesel prices of £2.50 to £3 were “definitely in the realms of possibility”.

The Government has previously hinted that it may look to move beyond fuel duty entirely, in order to recoup the revenues that will be lost as more and more people climb into electric vehicles (EVs).

The Treasury launched a consultation which covered the future of VED, with direct reference to EVs, following the March 2020 Budget, but it has still not published its findings.

A road pricing system, based on miles driven, is backed by a majority of fleet decision-makers, research from Fleet News suggests.

The snap poll, taken in the wake of a report from MPs on the Transport Committee recommending road-user charging as the only way to plug a £35 billion fiscal black hole from a fall in revenues, showed 55% support for the tax change.

A sizeable minority, two-in-five fleets (40%), however, did not favour road pricing, while 5% said that they were unsure.

However, there was no mention of an alternative road tax system in the Chancellor’s Spring Statement, despite the Scottish Government considering a pay-as-you-drive scheme to help meet climate change targets and Transport for London (TfL), investigating the merits of a road pricing scheme for the capital.

Ahead of last year’s autumn Budget, the Government was urged to reveal benefit-in-kind (BIK) tax rates beyond 2024/25, with fleets wary they could face a substantial hike in an effort to claw back lost revenue.

The Association of Fleet Professionals (AFP) said businesses and employees were entering into a four-year cycle with no indication of what the rates will be for 2025/26.

However, there was no announcement around company car tax rates, which means fleets and company drivers may now get much-needed clarity until the Budget in the autumn.

Lex Autolease's Barnett said: “A long-term visibility of company car rates beyond 2025 is needed to give fleet decision-makers the clarity they need to invest in an electrified future."

"Coupled with longer lead times from manufacturers, those ordering vehicles now are doing so entering a period of uncertainty beyond 2025," he added.

"The industry must see transparency over future company car rates in order to plan effectively.”

The National Insurance (NI) threshold was due to increase by £300 this year, but with the country facing a cost-of-living crisis, Sunak has raised it by £3,000.

"From this July, people will be able to earn £12,570 a year without paying a single penny of income tax or National Insurance," Sunak told MPs.

"That’s a £6bn personal tax cut for 30 million people across the United Kingdom.

He added: "The largest increase in a basic rate threshold ever, and the largest single personal tax cut in a decade."

Sunak says 70% of workers will get an effective tax cut as he raises the threshold for paying NI by £3,000.

Helen Morrissey, senior pensions and retirement analyst at Hargreaves Lansdown, says that the Chancellor's actions will put some money back in the pockets of lower earners at a time when costs are on the rise.

However, she said: "By lifting the threshold, care must be taken that workers earning less than £12,570 per year do not lose access to vital National Insurance credits for state pension.

"The state pension forms the backbone of most people’s retirement and therefore, they should ensure they do not incur gaps unnecessarily, that mean they end up with less in retirement.

"Other benefits such as statutory sick pay will give you credits if you apply for them.

"It is therefore vital people worried they may no longer be getting National Insurance credits check to see what benefits they are entitled to, so these credits can be made."

For more reaction from the fleet and leasing industry, click here.

The Chancellor will deliver the Spring Statement today, with the fleet and leasing industry hoping for help and clarity on a series of issues.