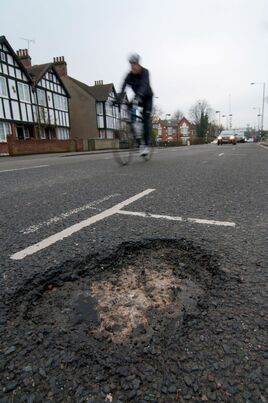 The cost to repair Britain’s pothole-stricken roads has soared to more than £12bn and works could take more than nine years to complete, according to a new report.

The Annual Local Authority Road Maintenance (ALARM) survey, published by the Asphalt Industry Alliance (AIA), shows that the reported backlog of carriageway repairs has increased by almost a quarter since last year.

It has cost fleet operators and private motorists £1.7bn in vehicle repairs, over the last 12 months, according to Kwik Fit.

Rick Green, AIA Chair, said: “Local authority highway teams have a legal responsibility to keep our roads safe, but do not have the funds to do so in a cost effective, proactive way. As a result, while they report some slight improvements in surface conditions, the structure of our roads continues to decline.

“Although surface repairs have a part to play in extending the life of local roads, short-term fixes, including filling potholes, is indicative of a network that is ‘on the edge’ and less efficient and sustainable when it comes to materials usage and whole-life carbon emissions.”

The ALARM survey reveals that Local authorities would have needed an extra £1bn last year just to reach their own target road conditions, before even thinking about tackling the backlog of repairs.

Almost one in five local roads could need to be rebuilt in the next five years, accounting for nearly 37,000 miles of the network.

Green added: “The longer it takes for the funding to be put in place to tackle the backlog of repairs, the more it is going to cost to put it right in the future. Four years ago, the AIA calculated that an additional £1.5 billion per year was needed for 10 years to bring local roads up to scratch. In the meantime, the network has continued to decline and ALARM 2022 indicates that an additional investment of more than £2 billion a year over the next decade is now needed.”

Kwik Fit’s research found that 13.3 million motorists say their car has suffered damage in the last year as a result of a pothole impact, with the average individual repair bill coming to £132.

The RAC’s head of roads policy, Nicholas Lyes, said: “This year’s AIA ALARM report provides a sobering picture of the dire condition of our local road network. Not only has there been a significant increase in the cost to fix the backlog of defects, but worryingly the report also shows that roads are only resurfaced once every 70 years on average, with maintenance mostly focusing on filling potholes which is often nothing more than a sticking plaster.

“The Government must now look at implementing a long-term funding strategy which ringfences a small proportion of existing fuel duty revenue to give local authorities the resources to properly plan maintenance and to ensure our local roads are once again made fit for purpose.”

Jack Cousens, head of roads policy at The AA, added: “Each year the debate around roads maintenance degenerates into a blame game between local authorities and Government as each claims it is the other’s responsibility to resolve. Local and national government must get round the table and create a fully-funded plan that will help make our roads safer. There is now a need to focus available road funding on the most basic need: fixing the roads – for the benefit of drivers, cyclists and pedestrians.”