Almost £13m paid out in pothole compensation to 37,000 drivers 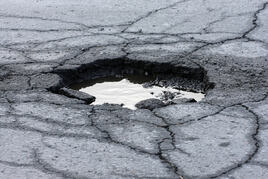 Councils and road authorities in England, Scotland and Wales have paid out almost £13 million for vehicle damage caused by potholes between January 2018 and October 2021, new research suggests.

Motorists across England, Scotland and Wales submitted more than 145,000 compensation claims to councils, with 37,366 motorists receiving compensation, on average, of £347 – a success rate of 25%.

The cost of filling a pothole has previously been estimated to cost £47.

National Highways (formerly Highways England), in charge of England’s trunk roads, was the highest paying authority, stumping up just over £865,000 in compensation.

The research, from What Car?, comes after The Asphalt Industry Alliance published its latest ALARM report, with local authorities in England and Wales facing a nine-year backlog of road repairs estimated to cost more than £12 billion.

Lincolnshire County Council received the highest number of damage claims across the four years, with 8,810 claims, of which 4,313 were successful, costing the local authority more than £760,000 – £177 per claim.

Wiltshire Council was found to have the highest share of compensation claims paid, with 86% of the 1,594 claims paid, totalling £302,000 over the four-year period.

Slough Borough Council and Stoke-on-Trent City Councils were the second and third highest, paying out 65% and 62% of all claims, respectively.

In total, 11 councils across Britain paid more than half of all claims.

Not all local authorities answered the Freedom of Information request; 344 responded while 161 said they were unable to provide figures as road compensation often fell under the remit of county and city councils, rather than borough or district councils.

Meanwhile, a survey of motorists it conducted found almost one in four 24% motorists had damaged their vehicle in the past 18 months from hitting a pothole.

Two-thirds of respondents were aware they could claim for the damage caused from their local roads authority, though only one in 10 had ever done so.

The cost to repair Britain’s pothole-stricken roads has soared to more than £12bn and works could take more than nine years to complete, according to a new report.