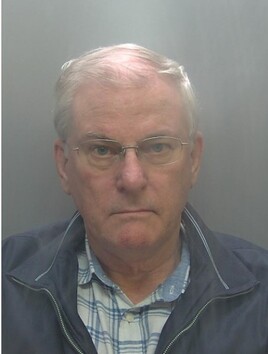 A driver who killed another motorist in a crash and then lied to police about his speed has been jailed.

Martin Young (pictured), 68, was driving his blue Audi A3 along the A1307 on 16 December, 2019, when he crashed into a Volkswagen Polo being driven by William Hall, 84, at the junction with Dean Road, between Horseheath and Linton.

Hall died in May 2020 after being kept in hospital with a neck fracture and contracting Covid 19.

An investigation found Young had been driving at nearly 90mph at the time of the collision, when Hall’s Polo turned right across the A1307 at the Dean Road junction.

Initially, it was thought Hall was at fault for the collision. Young provided a witness statement and said he had dashcam footage.

This footage showed he was travelling at 86 to 88mph, yet in a telephone statement to police, Young described the speed he was driving at as between 60 and 65mph.

Young was sentenced to one year and eight months in prison at Cambridge Crown Court after pleading guilty to causing death by dangerous driving and perverting the course of justice.

He was also disqualified from driving for five years and 10 months and ordered to take an extended re-test, as well as pay costs of £2116, plus a victim surcharge.

Detective Constable Rochelle Eves, who investigated, said: “Young was travelling at excess speed on the A1307, a road he knew to be notorious for fatal collisions.

“His attempt to avoid responsibility ultimately failed and it shows that if you lie to the police you will be found out.

“This is another case which shows the importance of careful driving and the dangers of speeding.

“I want to thank the family of Mr Hall for their dignity and patience while we have investigated this sad and complex case.”

Drivers should always drive as if they are being watched by the police, with scores of dash cam recordings submitted to forces on a daily basis, says RAC