Fleets given experience of hydrogen future by Toyota: Company Car In Action 2018 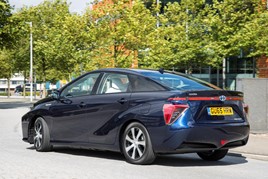 Fleet decision-makers were given a chance to experience a hydrogen future in test driving the Mirai, while Toyota and Lexus focuses on quality business rather than quantity in a toughening market.

Which models have been the most popular with fleets on your stand this year?

Hunt: The SUVs are interesting for everybody because that's where the market is.

C-HR has been very popular.

People are also looking to the future so Mirai has been very popular because we've had the car in the market, but we've not really been able to demonstrate it fully with customers.

Hydrogen fuel means the car is not cheap, but what people understand is you'll be able to achieve a better price point in time so they’re thinking about future planning.

What is your priority this year?

Broad: Carrying on the path that we're on at the moment. I think we're quite privileged as a manufacturer and as two brands to have a good balance between supply and demand.

We want to make sure we keep delivering ease to do business with and quality.

We're a very customer centric organisation. ‘Do the right thing’ is in our corporate DNA and we will carry on doing that.

What are your fleet sales expectations for the rest of this year and longer term?

Broad: I think overall we'll probably be flat by the end of the year so there will be no overall growth but if you look at the decline in the market in general, and there has been a rationalisation going on in the UK car market.

Our share will increase as a function of that, but that was our plan at the start of the year. It isn't just about the numbers, it's about the quality of those numbers.

Longer term it's very difficult to predict things and a lot of it is product related.

New RAV4 gives us a new entrant into D-SUV and new Auris gives us a very strong entrant into the C hatchback market which, whilst it's declined with the growth of SUVs over the last few years, is still a very important user chooser segment of the market place and I think we will have a product next year that will do very well for us.

Toyota has announced its win of the Green Fleet Manufacturer Fleet News Award, which shows “commitment” to improve environmental performance.

Toyota has unveiled the new Rav4, which will be available in the UK in early 2019.