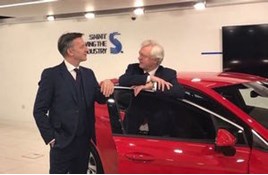 The UK automotive industry has met with Brexit minister David Davis to call for access to the single market to be retained.

At a roundtable discussion at the Society of Motor Manufacturers and Traders (SMMT) in London, Davis reaffirmed the importance the government places on the UK’s world leading automotive industry.

The automotive sector is the UK’s largest manufacturing export sector and is spread nationally. In 2015, the sector employed 169,000 people in automotive manufacturing, exported 1.2 million cars and generated £34.3 billion in export revenue.

Secretary of state for Exiting the European Union, David Davis, said: "The UK’s automotive sector is one of the most productive in the world and we want to see it go from strength to strength.

"As the UK exits the EU, we are determined that our country remains a great place to invest and to do business. We want the best deal for trade in UK goods and services, including for our important automotive sector.

Industry minister, Nick Hurd, said: "The UK automotive sector has had a remarkable year - exporting over a million cars around the world. This is thanks to our highly-skilled workforce and long-term investment in new technology and innovation, including the recent £390 million investment in electric and driverless cars at Autumn Statement.

Our upcoming industrial strategy will build on this work further, by creating an environment where the auto sector can maintain its competitiveness, while upgrading productivity and creating high skilled jobs.

SMMT chief executive, Mike Hawes, said: "Today’s discussions were a good opportunity to meet with government to reinforce the success and importance of UK Automotive, and to highlight the specific priorities for our sector when leaving the European Union.

"Being part of the single market has helped make the UK automotive sector amongst the most competitive in the world and a critical part of the UK economy. It is essential that we maintain those benefits and we will work with government and our partners in Europe to ensure the global success of our sector continues in the future.

"Today’s event was the latest in a series of roundtables the government is having with different industries up and down the country to ensure that we get the best deal for Britain as we negotiate our departure from the EU."

The Secretary of State was joined at the roundtable by Minister of State for Climate Change and Industry Nick Hurd, Minister of State at the Department for Transport John Hayes and representatives from the following companies and associations: