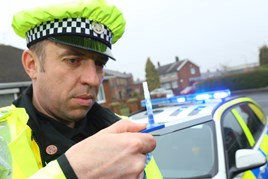 The UK’s motoring crime hotspots have been revealed with drivers in the south-east of England coming out on top as the worst offenders.

The data, compiled of Freedom of Information requests obtained by Confused.com, shows south-east drivers to be the worst offenders for a number of motoring-related crimes, including seatbelt offences and driving with defective tyres. However, speeding accounted for 94% of the region’s driving crimes, with a whopping 470,000 speeding offences recorded by police.

Drivers in the north-west and East Anglia were in second and third place, with 288,000 and 275,000 speeding offences, respectively.

Worst regions for motoring offences between 2015-2016

Driving under the influence appears to be most prevalent in this region, with almost 13,000 drink and drug-driving crimes on record.

London follows closely behind on both fronts, with around 12,300 drink-driving offences and 600 drug-driving violations.

When it comes to committing seatbelt offences, drivers in the north-west and London are prolific, with around 7,400 and 7,700 violations recorded respectively. But south-east drivers come out on top – yet again – having committed almost twice as many seatbelt crimes, with 14,200 incidents in total.

When it comes to pinching petrol, police in the west-midlands recorded 6,700 incidents of motorists driving off from fuel stations without paying, followed by 4,900 violations in Yorkshire & Humber and 4,600 in the south-east.

And, while the South-East is also top of the ranks for driving with defective tyres, with 2,400 crimes committed by drivers, East Anglia is not far behind with 1,800 bald tyre offences recorded in the region.

Worst regions for motoring offences between 2015-2016, by rank

Some regions are more law-abiding than others and do not top the ‘worst’ rankings, but they still rank highly in certain areas. Wales seem to be in the habit of driving without wearing seatbelts, with 5,700 offences recorded by police. And, even though driving crime in Northern Ireland appears to be relatively low, the region still accounts for 67,000 motoring crimes.