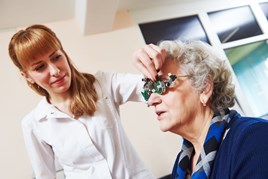 The only eyesight test at present is when you take your test and have to read a number plate at 20 metres.

GEM says a detailed test of a driver’s visual acuity and field of view should be required every 10 years.

The call follows a survey of more than 1,000 GEM members. An overwhelming 87% said compulsory eye testing would lead to safer roads.

GEM road safety officer Neil Worth commented: “If you can’t see effectively, you shouldn’t be driving, but the truth is that there are many drivers whose eyesight has deteriorated to very dangerous levels.

“In an ideal world, we would want compulsory eyesight tests every two years, particularly for drivers 40 and above. But the most practical measure would be a test of visual acuity and field of view every 10 years, which would fit in with licence renewal, making it practical and enforceable.

“Even DVLA guidelines to medical professionals state that eyesight can decline gradually and unnoticed, with people losing up to 40 per cent of their visual acuity without being aware of deterioration.”

GEM believes that regular mandatory eyesight tests for drivers would offer more than just a simple and effective way of reducing collisions caused by defective vision.

“Compulsory eyesight tests would not only make our roads safer, saving lives, disability and many millions of pounds through the reduction in the number of crashes, but they are also a valuable tool for the early diagnosis of many other costly medical conditions, irrespective of driving,” said Worth.

“The time has come to accept that the current driver eyesight test simply isn’t fit for purpose. What’s more, it is certainly no longer acceptable for drivers to self-certify.

“Many more people are staying behind the wheel into their eighties and beyond. This, coupled with the greater volume of traffic and an increase in distractions, both inside and outside the vehicle, points to the clear need for more regular and detailed eyesight testing.”

The eyesight test was introduced to the driving test in 1937 and has only been amended in minor ways over the years to reflect changing number plate sizes. It is the only eyesight test drivers are required to undertake until they reach the age of 70.

Field of view testing is a requirement in many US states, to check whether motorists can see and react to what’s happening around them.

Many campaigns over the years have attempted to persuade the Government to introduce measures that would make drivers take a more responsible view on the subject, but so far it has declined to change the current regulations.