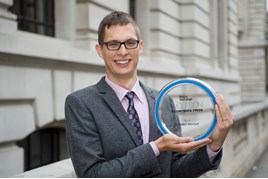 A recent graduate from UCL has won the 2017 Wolfson Economics Prize, including £250,000, after arguing motorists should pay to use roads on a per mile basis.

Gergely Raccuja’s entry, ‘Paying for road use could be Miles Better’, went head to head on a shortlist of five, judged by senior policymakers including the former Chancellor Lord Darling.

He argued that to restore trust between politicians and motorists, fuel duty and VED should be scrapped and replaced with a “simple and fair” distance-based charge that also captures road and environmental impacts.

The lighter and cleaner your vehicle is, the lower the per mile charge. The system, he argued, would boost investment and update the way we run roads ready for a new generation of electric and autonomous vehicles.

Drivers won’t be asked to pay more overall, paying in proportion to the distance they drive each year, he said. The charge would be collected by insurers who already manage all data necessary for calculating the charge.

The Office of Rail and Road would ensure drivers are guaranteed fair treatment by setting the base charge and ensuring a fair proportion of the proceeds are ring-fenced for spending on both local and national highways, pledging a “pothole-free Britain” within five years.

The Treasury wins too, according to Raccuja. With both the number of vehicles on the road and total vehicle mileage projected to grow, government revenue will rise over time. This will stop and reverse the growing loss to the Treasury from falling fuel duty, estimated at an extra £2.3 million a day.

Raccuja was born in Budapest, Hungary and moved to the UK in 2011. He read Politics, Urban Planning and Italian at UCL, graduating in 2015 with First Class Honours. In January 2016, he started as a Graduate Transport Planner at Amey Consulting in Birmingham.

For his final submission Gergely received input from the RAC Foundation, one of Britain’s largest motoring organisations.

The RAC Foundation, led by Steve Gooding, teamed up with Raccuja – going head to head with AA President Edmund King and his wife the economist Deirdre King.

The Kings’ shortlisted entry proposed the idea of Road Miles, where drivers benefit from at least 3,000 free Road Miles each year with a small charge thereafter, and adopt-a-highway naming rights to boost investment.

The 2017 Wolfson Economics prize, the third to be run, received over 120 entries from seven countries. Judges were struck by the range of innovative ideas among the finalists.

Clearways, a team from Australia, sought to end congestion by rewarding people for changing their driving habits, while Catriona Brown proposed T-Forward, a new technology platform.

Transport economists Volterra teamed up with engineering firm Jacobs to call for “Pricing for Prosperity”, eliminating fuel tax and VED and replacing them with variable charges for each journey helping drivers make better decisions on how, when and where to travel.

However, it was 27-year-old Raccuja that most impressed the team of judges, including former Chancellor Lord Darling, chairman of Legal & General Sir John Kingman, economist Bridget Rosewell, former Deputy Mayor of London for Transport Isabel Dedring and The Times associate editor Lord Finkelstein – to scoop the £250,000 prize at an event in central London on Thursday evening.

Raccuja said: “The key to our entry was to keep things simple, yet come up with an answer that was sophisticated enough to deal with an upheaval in cars and road transport which hasn’t been seen since the introduction of the motor car well over a century ago. I hope I can persuade our politicians too that everything to do with our roads could be better.”

The founder of the Prize, Lord Simon Wolfson of Aspley Guise, said: “The 2017 Wolfson Economics Prize sought a better way to pay for better roads as congestion, pollution and potholes remain a source of daily misery for millions of people: undermining our economy, environment and quality of life.

“Gergely’s entry met that challenge, and is ground-breaking, yet simple – with the backing of a major motoring organisation.

“I would like to offer my warmest congratulations to Gergely and his contributors for their brilliant submission.

“Policymakers can learn much from this year’s Prize, and I hope they will take forward solutions to solve one of the greatest infrastructure challenges of modern times.”