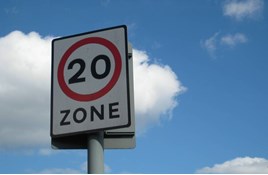 The International Transport Forum for the Organisation for Economic Co-operation and Development (OECD) is calling for a 20mph speed limit in built up areas where there is a mix of vulnerable road users and motor vehicles.

It argues the case for the limit in a new report on “Speed and Crash Risk” published this week.

The report says that where motorised vehicles and vulnerable road users share the same space, such as in residential areas, 20mph should be the “recommended maximum”.

It cites 20mph (30kmh) as the developing international standard referencing the Netherlands where 70% of urban roads have already adopted the limit.

The report says research has indicated that the death risk is about 4-5 times higher in collisions between a car and a pedestrian/road worker on foot at 30mph (50kmh) compared to the same type of collisions at 20mph (30kmh).

The report concludes: “To reduce road trauma (i.e. fatalities and injuries), governments need to take actions to reduce the speed on our roads and also to reduce differences in speed.

“As individuals, the risks for a severe crash might seem small, but from a societal point of view, there are substantial safety gains when the mean speeds and speed differences on the roads are reduced.”

Rod King, founder and campaign director for ‘20’s Plenty for Us’, said: “This is yet another report coming to the firm conclusion that 20 is plenty where people live, work, play, shop and learn.

“Other countries have adopted a near universal 30kmh limit for urban and residential streets.

“Over 25% of the UK live in authorities who have also set 20mph as the right urban limit. Nearly half (44%) of Londoners are now living in 20mph streets. The Scottish Parliament is considering a bill to make 20mph the limit (with exceptions) for built up roads.

“It’s time to end the post code lottery on pedestrian/cycling safety and general well-being in our residential and urban places by setting a 20mph default limit for built-up roads across the UK.”

Just over 60% of UK drivers have admitted they will continue to speed, even if that means paying the higher level fines introduced earlier this year.

The International Transport Forum has issued a report confirming existing scientific evidence that speed has an influence on road fatalities.