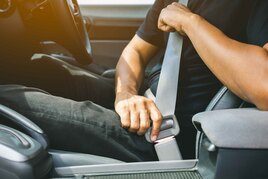 The Government is being urged to honour a commitment made in its road safety action plan to increase the penalty for not wearing a seatbelt.

In the plan, launched in July 2019, the Government said people caught not wearing a seatbelt would face penalty points on their licence as well as a fine.

The offence has long been endorsable in Northern Ireland, where drivers who fail to ensure a child in a front or rear seat is not wearing a seatbelt also face points on their licence. However, these tougher sanctions do not apply in England, Scotland or Wales.

GEM chief executive Neil Worth explained that official figures show that, despite compliance rates of 98.6% among car drivers, more than one in four (27%) of those killed in cars were not wearing a seat belt – amounting to more than 200 deaths.

“We have seen mobile phone penalties for drivers rise in recent years, and if seatbelt offences were dealt with in a similar way, we believe would see a significant and immediate reduction in the number of drivers and vehicle occupants killed and seriously injured on our roads.”

A national seatbelt operation, organised by the National Police Chiefs’ Council, will start from Monday (May 24).

DriveTech has launched a new whitepaper highlighting the ‘reality’ of road safety in the UK and more globally.