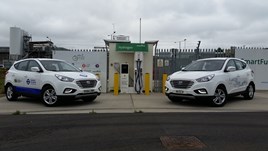 The Hydrogen Transport in European Cities (HyTEC) consortium is plotting the way forward for the deployment and operation of hydrogen fuel cell vehicles.

Involved in a four-year initiative to develop demonstration projects for hydrogen fuel cell vehicles, HyTEC aims to explore how the technology can be rolled out across Europe.

Key outputs from the HyTEC initiative include:

The outputs from HyTEC will inform governments and cities across Europe on what the key considerations are when looking to implement a Hydrogen transport infrastructure.  This will ensure a greater understanding of what this technology can achieve and will play an important role in the future adoption of the burgeoning hydrogen energy market.

“The outcomes of HyTEC’s work really will set the future pathway for successful adoption and implementation.

“The learning from the HyTEC initiative will provide incredible confidence to Governments, investors, developers and energy providers to see that the future for hydrogen powered transport will become a reality.”

Hydrogen fuel cell vehicles are a real and viable alternative to those powered by petrol or diesel, offering zero emissions at the point of use.

It was set up to create new European hydrogen passenger vehicle deployment centres in London and Copenhagen and also to link the new and existing fuel cell vehicle demonstration projects across Europe, including a small fleet of passenger cars deployed in Oslo.

A key objective was to understand how best to develop infrastructure networks, including the rollout of hydrogen fuelling infrastructure around key cities.  There was a particularly focus on strategic clustering to encourage the sustained growth of the hydrogen transport sector.  This is especially important as it expands and enters an early commercialisation phase across Europe.

Across Europe, HyTEC acted as a catalyst and a link for key demonstration projects: