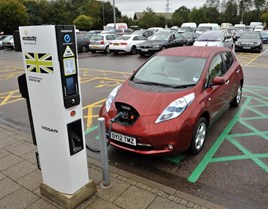 Electricity company Ecotricity is to introduce a £6 fee per use of its motorway electric vehicle charging network.

The charge, which is being introduced from Monday July 11, is applied to all users that are not Ecotricity home electricity customers, according to Motoring Research.

Customers have been contacted by email with details of the fee, which would give users a 20 minute charge at one of its 300 rapid charging units which are mostly located at motorway service areas.

In the message, Ecotricity said: "To keep pace with demand, we need to build more electricity pumps – at existing and new locations.

“So the time has come for us to charge – for charging. We’ve taken a lot of feedback from EV drivers in order to arrive at the right pricing model. We’ve decided that a simple flat fee of a fiver for a 20 minute fast charge strikes the right balance.”

The charge has since been revised to £6 for 30 minutes charge, following customer feedback.

Access to the network and payment will now require the Ecotricity app. The move means it is likely that motorway charging of plug-in hybrid vehicles, with a sub-50 mile range, will become uneconomical.

Chargemaster has already introduced a monthly service fee to access its larger national network in August 2013, which starts from £7.85 a month. Within the network, some sites are free for subscribers while others levy a further charge.