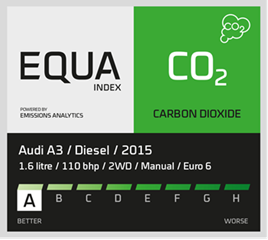 Emissions Analytics has added a CO2 index to its EQUA Index series, the latest component shows the extent to which actual emissions of greenhouse gases from cars exceed the official figures on which our national objectives and vehicle taxation are based.

The new EQUA CO2 Index rates cars for their absolute level of CO2 emissions, and how close to their official figures they get.  The highest, A1, rating has currently been achieved by only one vehicle, a Citroen C3 diesel – ‘A’ represents the best absolute emissions, and ‘1’ the accuracy factor.

Taking the car market as a whole, average real-world emissions of Euro 6 cars are 181g/km of CO2 – a figure that hasn’t improved since the previous, Euro 5, generation of car. Compared to the current legal fleet average target of 130g/km, the new EQUA data shows that this legal target is being exceeded by 39%.

Nick Molden, ceo and founder of Emissions Analytics, said: “In recent years, we have been kidding ourselves about our actual achievement in reducing CO2 from cars.  Encouraging official data has given a misleadingly positive impression.  The new official world harmonised test will help close the gap, but only partially.”

The data within the new EQUA CO2 Index reveals that 1.5-litre engines typically deliver the best real-world CO2, rather than the most heavily ‘down-sized’ units.  Engines between 2.0 and 3.0-litres are typically closest to their official numbers, with around 40% of vehicles achieving the ‘1’ accuracy rating.

The launch of the new EQUA CO2 Index also adds intelligence to the recent petrol versus diesel debate. The index’s data shows that, when comparing a range of engines in the real world, diesel engines typically generate 169g/km of CO2, compared to 196g/km for petrol units. This equates to a 16% difference in diesels’ favour when comparing like for like. Despite the recent controversy over manipulated NOx emissions, it underlines the fact that the manufacture of more petrol-powered vehicles, to address environmental concerns, could negatively impact CO2 pollution levels.

The suite of EQUA Index data is available, for free, from the programme’s website www.equaindex.com.