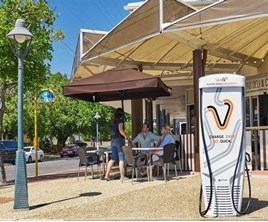 A new entrant to the UK’s plug-in vehicle infrastructure market is looking to fleets to establish its business with what it calls “next-gen” rapid charging technology.

Electric World Enterprises (EWE) was set up in spring this year by chief executive Sergio Sopron in London and the company has secured the first UK distribution rights to Australian-based Tritium’s Veefil-RT 50kW DC rapid charger.

The chargepoint is capable of charging an electric vehicle from flat to 80% in 20 minutes. It is priced between £30,000 and £40,000 per point, depending on a survey of the fleet’s business. EWE will be offering finance options to businesses to fund charge point installations.

Mathew Collins, EWE commercial director, told Fleetnews.co.uk that the UK plug-in vehicle market is ripe for growth but there needs to be a reliable infrastructure in place for businesses to increase the amount of plug-in vehicles they have on fleet.

He said: “The Veefil features advanced technology that reduces maintenance and gives it a long life.

“It has a small footprint so we can fit these points into existing car parking spaces. Every charge point will come with a three-year warranty which shows how confident we are in the technology.”

The charge points are around two metres high, less than a metre wide and can be supplied to fleets with their own branding on the charger shell.

Collins said the rapid chargers will be important for businesses that are looking to minimise downtime with their fleets that can call back to base briefly to top up to finish a daily route.

According to Zap Map there are now 1,379 rapid 50kw chargers in the UK. An EV must come with a converter capable of accepting a higher level of charge in order to use rapid charging.

EWE will be competing with established brands like British Gas and Chargemaster for offering rapid charging points at businesses. A rapid charger from British Gas is priced between £28,000 to £35,000, while Chargemaster said its top of the range 50kw “ultracharger” has a unit price of £19,000 but the total cost would only be established after a site visit. Both rapid chargers are covered by a three year warranty.

Collins claims the Veefil will last longer than other rapid charging systems as it features a patented liquid cooling system to prevent overheating with examples running for several years with no issues.

Collins believes the UK’s EV market is reaching a tipping point, with Government incentives and city centres in particular moving toward an electric future.

He said: “For EVs to work for fleets, a reliable infrastructure has to be in place. This is a disruptive technology and we’re not trying to sprint here, we know there are competitors in the market that are established, but we think there is room for growth in the UK.”

Collins isn’t setting specific goals in place for how many charging point installations EWE will complete before the end of the year. However, he said the company will be talking to all fleets that have plug-in vehicles on fleet that need rapid chargers installed.

He said: “Some fleets may have already installed charging points at their business, but like anything, the technology moves on and you upgrade.

While EWE is concentrating on the fleet market as it establishes its business, Collins said the UK’s charging infrastructure as a whole needs to get to the point where charging a car is as easy as filling up a tank with fuel.

He said: “When the technology gets to that point, that will be when it will reach mass adoption.

“I look at EV charging the same as the mobile phone industry. The technology continues to push on and the same will happen in this market.”