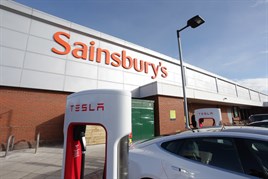 Finding a public EV charge point has long formed a block to progress, but the networks are developing.

The inability to charge an electric vehicle on the public network has long been seen as one of the stumbling blocks for the growth of electric cars in the UK.

The gradual, piecemeal rolling out of infrastructure in pockets of the UK had meant it was not inconceivable that drivers travelling longer distances or on the boundaries of a few areas needed to carry a handful of RFID (radio-frequency identification) cards to stand any chance of charging their car.

However, investment and developing technologies now mean that, in many locations, all a driver may need is a smartphone, giving access to a smaller number of networks but with larger coverage.

Smaller players do still exist, but these are most likely to be of use to drivers in specific areas.

In total, more than 4,000 public charging points have been installed since 2010 through a series of ‘Plugged in Places’ match-funded schemes.

Eight regions were successful in achieving a share of £30 million – but there wasn’t full interoperability between the regions.

In the intervening years, as the Plugged in Places funding ended, many schemes were incorporated into other networks.

For example, the Manchester and Scotland schemes joined the North East’s Charge Your Car (CYC) network, which also expanded to manage other charging points elsewhere in the country – including mini networks established in the South East and South West.

This meant, over time, CYC built up a substantial network of around 2,000 primarily public sector charging points.

In early 2017, its parent company Elektromotive was bought by Chargemaster, with the new owners set to invest in renovating charging points and expanding the newly combined network.

It’s the largest of all the networks, and is likely to offer good coverage for many drivers.

However, agreements with local councils and legacy schemes mean that for fleets, it may be worth opening an account with one or two of the smaller operators to provide blanket coverage.

Exclusively for Tesla drivers, the network comprises about 180 locations – a mix of ‘Destination’ 7kw and 11kw fast-chargers and 120kw ‘Supercharger’ units.

The superchargers are located generally at motorway service stations, dealerships or hotels, and are capable of providing up to 170 miles of range in half-an-hour.

Previously free, the Supercharger network is now 20p per kWh for drivers of vehicles bought after January 2017 – with 400 free kWh of usage awarded each year.

The Polar network is operated by Chargemaster and works on a pay-as-you-go or monthly subscription basis.

The largest network in the UK, it has more than 5,000 charging points, including the 2,000 on the CYC network.

The majority of points on Polar are free to charge, but the network levies either a £1 per session fee for pay-as-you-go (instant) users, or a £7.85 monthly subscription for ‘Plus’ users.

The points charge at a variety of speeds, with standard charging units most likely to be free and with most rapid chargers levying a per kWh fee.

Businesses can open a corporate Polar account, which allows central accounting, and gives access to a control panel where fleet managers can track usage of public facilities.

Points can be accessed either by RFID card or through a smartphone app.

The Electric Highway network has been operated by green energy firm Ecotricity since 2011 and consists of around 300 charge points located primarily at motorway and trunk road service stations, along with some branches of the IKEA furniture chain.

From June 26 drivers will pay a £3 connection fee followed by 17p/kWh, with a maximum charge time of 45 minutes.

The charging points are now managed by apps, available for iPhone and Android devices, and are primarily fast- or rapidcharging points, meaning a Nissan Leaf could reach 80% charge in the time allotted.

Ecotricity does not offer a corporate system – drivers wishing to use the network on company business will have to make payment personally then reclaim the cost through their expense system.

The GeniePoint network has taken over a number of charging points installed by the former Source East Plugged in Places network, and also works with a number of local authorities.

Drivers can buy a GeniePoint RFID card for £9 or, unusually, link an existing RFID card from another network to the scheme.

The network charges a connection fee that varies by location and charging unit type, along with a 30p per kWh cost for charging.

Source London is one of the last of the Plugged in Places programme, now operated by French firm Bollore.

The charging structure is two-tier, with either full or flexible membership levels. Full membership is £4 a month, with a 3.6p per minute cost for charging on a standard charging point, or a Flexi membership, with a £10 one-off cost and a 5.9p per minute rate.

Both membership levels make a charge of £1.80 plus 30p per kWh of power used for rapid chargers.

All rates have a 20-minute minimum charge.

Drivers using on-street parking to charge their vehicle do not have to pay a parking charge – just the cost levied by Source London.

Corporate membership is also available, so fleets can manage usage and payments centrally.

In addition to being a charging point designer and manufacturer, East London based Pod Point operates its own network.

The ‘Open Charge’ public network of around 270 locations uses an app or mobile web page to activate charging, although drivers without an account can generally access 15 minutes of ‘emergency power’ without logging in.

These charging points are operated by a mix of hosts, from local authorities to businesses, supermarkets and shopping centres.

Many remain free, while others now levy a charge per kWh of power used, or time spent.

To make the process more understandable, the Pod Point app will show a ‘range per

hour’ figure, estimating the distance the extra charge can allow the driver to cover.

And on the horizon..

In preparation for the introduction of ‘zero emission capable’ taxis in the capital in 2018, Transport for London is investing £18m in infrastructure to facilitate the rollout of 300 additional rapid charging points in and around the city by 2020.

These points will be funded, installed and operated by five companies and consortia, with strategic hubs at Shell sites and around airports under consideration.

One of the key points is that drivers can pay as they go using a contactless credit or debit card, in a similar way to travel on the London Underground, without having a special RFID card, smartphone app or membership of a specific scheme.

Meanwhile, the latest Renault Zoe range includes the ‘ZE Pass’ dashboard and phone app, which will allow payments and charging activations to be made centrally from the car, without use of individual apps or cards.

By 2030, one in three new cars registered in Europe could be an electric or plug-in hybrid vehicle, forcing governments to re-evaluate tax systems to avoid losing revenue.

Warner Leisure Hotels has installed free-to-use Rolec EV charging points at all of its hotels throughout the UK.