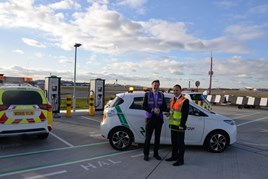 Heathrow has reached a key milestone in its pledge to ‘Go Electric’ with the delivery of the 50th electric vehicle (EV) to the airport’s fleet.

This is a key step in Heathrow’s promise to make all of its cars and small vans electric or plug-in hybrid by 2020 to help improve air quality around the airport. The 50 EVs reduce the airport’s fleet emissions by 165 tonnes CO2/year, equivalent to the amount of energy used by 18 homes annually.

This announcement comes as Heathrow celebrates receiving two awards for their fleet. The airport recently received the award for Ultra-Low Emission Infrastructure at the Energy Saving Trust’s 2017 Fleet Hero Awards. Heathrow won the accolade for the airport’s achievements growing the current charging infrastructure, which is now the site with the highest density of charging infrastructure in Europe. Heathrow’s has more than 80 charging points available to passengers, colleagues and airside vehicles.

Heathrow was awarded the Environment and Low Carbon award at the event for the work done to improve air quality with the use of electric and plug in hybrid vehicles.

Since pledging to ‘Go Electric’, Heathrow has spent more than £4 million in charging infrastructure, with a total of more than £5m committed to be spent by the end of 2018.

Heathrow is also actively working in collaboration with Transport for London (TfL) to install seven rapid charging points for black cabs before the end of 2017. These rapid charging points, some of the first in London, will support the Mayor’s requirements for all newly licensed black cabs to be either electric or plug in hybrid by January 2018. These chargers will be installed in Heathrow’s Taxi Feeder Park and will work over three times faster than the average charger.

This move, along with Heathrow’s efforts to provide new public transport options into the airport like Crossrail and a potential Western Rail access, will reduce emissions and congestion related to airport traffic, and set a bold direction towards a future of sustainable aviation, it said.

Since committing to a new sustainability strategy, Heathrow 2.0, the airport has set out to establish itself as a world-leading airport in reducing emissions from all sources of activity, both on and off airport.

Heathrow was one of the first ten companies in the world to commit to EV100, which making takes Heathrow’s commitment to electric technology further by tying the airport to turning all large vans and half of its HGV’s electric or plug-in hybrid by 2030.

John Holland-Kaye, Heathrow CEO, said: “Our sustainability strategy, Heathrow 2.0, and global commitments like EV100 tie Heathrow to some ambitious but realistic targets to clean up our fleet and speed up the take-up of electric technology across our airport.

“Since our pledge to switch to electric cars and vans in 2015 we have made tremendous progress towards improving air quality in our city, but we are committed to go further yet.”

Handling 63 million passengers a year with 1,300 drivers and 480 vehicles makes... 'Efficiency a priority'.

Heathrow airport has added 17 Nissan Leafs to its fleet to inspire a new culture of electric car usage.