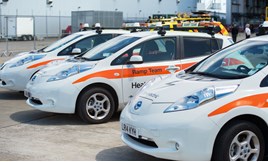 Heathrow airport has added 17 Nissan Leafs to its fleet to inspire a new culture of electric car usage.

The airport has allocated 12 vehicles to airside teams such as security and baggage while another five are to be used as pool cars.

Heathrow is committed to making the cars and small vans within its fleet electric or plug-in hybrids by the end of 2020.

Sales director at Nissan Motor (GB), Darren Payne, said: “I’m sure this initiative will inspire other businesses to follow Heathrow’s lead by using Nissan’s electric vehicles to both reduce their emissions and cut their running costs.”

It is hoped that the visibility of the airside vehicles will encourage third parties operating at the airport to follow suit.

Head of operational strategy at Heathrow, Peter Leeming, said: “We trialled the Nissan Leaf and found it was the perfect fit for many of our teams and the types of journeys they make. The trial went seamlessly, and within months we placed our order and put the Leaf into full time service.”

A video has been released detailing how the airport intends to implement the conversion and the trial process.

Indian restaurant owner Minesh Agnihotri expects to save £8,000 a year by making deliveries in a 100% electric Nissan Leaf.