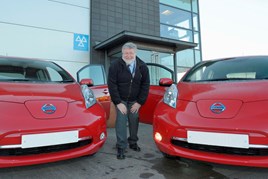 Wessex Garages on Hayes Way at Cribbs Causeway has provided the two vehicles to the police for use around the city of Bristol.

Andy Provis, group fleet manager at Wessex Garages, said: “It’s fantastic that Avon and Somerset Constabulary has invested in two of Nissan’s 100% electric Leafs. The practicality of the Leaf is really drawing people to make the purchase and we are pleased to see that the local constabulary is making the choice to choose electric vehicles where they can.

“There are many benefits of switching to an electric vehicle such as the low running costs and of course the environmental aspects. It is great to see Avon and Somerset Constabulary thinking and doing something about its carbon footprint.”

The Sunderland-built electric Nissan Leaf is also cheaper to run on a per-mile basis than petrol/diesel and as all-electric vehicles have less moving parts than their petrol or diesel counterparts they will need less frequent servicing too.

Hannah Watts, sustainability manager at Avon and Somerset Constabulary, said: “Trying to reduce the impact we have on the environment is important to Avon and Somerset police, so we’re working hard to cut the amount of fuel our cars use where we can.

“Policing is much more than responding to 999 calls and there’s definitely a place for electric vehicles in our fleet. We’ve already trialled a Nissan Leaf with one of our neighbourhood teams in Bristol and the feedback from officers was really positive.

“It makes absolute sense to permanently swap two regular general purpose vehicles, which do lots of journeys within the city boundary on a daily basis, for electric.”