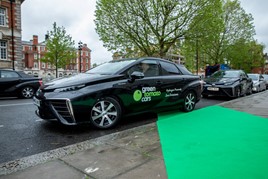 Three fleets of 60 hydrogen fuelled vehicles will be deployed in London, Paris and Brussels as part of the Zero Emission Fleet vehicles for European Roll-out (ZEFER) project.

FCEVs run on hydrogen gas as a fuel. A fuel cell transforms the hydrogen directly into electricity to power the vehicle and produces no emissions other than water.

It is hoped the project will improve the economics of operating hydrogen refuelling stations and help accelerate the commercialisation of hydrogen as a zero-emission fuel for Europe’s cities.

The project will gather data and disseminate results to demonstrate the business case for future FCEV adoption and test the performance of cars and infrastructure under high-mileage conditions.

ZEFER will be delivered by a consortium led by Element Energy, including hydrogen suppliers Air Liquide and ITM Power Trading, and fleet operators, including Green Tomato Cars, HYPE and the London Mayor’s office for policing and crime, while partners Cenex and the Mairie de Paris will support the analysis and policy conclusions.

Ben Madden, director at Element Energy, said: “We are delighted to be leading this major project which will demonstrate commercially viable use cases for hydrogen fuelled vehicles in high mileage urban fleets.

“We are excited to see first large-scale users starting to take up the technology in large fleets to do the day to day work of vehicles which operate in urban centres.”

Grayling said: "I was thoroughly impressed by the Toyota Mirai today and was delighted to be the first passenger in one of Green Tomato Cars’ new zero-emission vehicles.

"Improvements in hydrogen infrastructure over the last year and the developing partnerships between the hydrogen power providers, manufacturers of hydrogen vehicles and end users, are helping accelerate the decarbonisation of road transport."

The project is co-funded with €5m (£4.4m) from the Fuel Cells and Hydrogen Joint Undertaking (FCH JU), a public-private partnership supporting fuel cell and hydrogen energy technologies in Europe.

The 180 FCEVs will be procured from the vehicle manufacturers able to offer hydrogen fuel cell cars in Europe with the first 25 vehicles deployed this week in London by Green Tomato Cars, with another 25 due to be delivered in September. These vehicles will offer the same service as the current premium ‘Black Car’ service and will also be allocated to standard bookings across London and the Home Counties, 24/7.

Jonny Goldstone, managing director of Green Tomato Cars, said: “This is a truly unique project where investors in hydrogen technology, manufacturers of hydrogen cars and Green Tomato Cars as the end users, have come together with a commitment to make hydrogen transport work for the good of the people and the environment.

“We’d like to thank OLEV, the FCH JU and Toyota for their support in helping us acquire such a significant number of these innovative Mirai cars.”

Van der Burgh added: "We’re delighted that Green Tomato Cars have been happy with their Toyota Mirai cars and that they are taking 50 more. It’s clear that confidence in hydrogen powered transport is growing among end users, which is another step in the path towards a hydrogen society."

The Mirai are expected to do the same average mileage as other cars on the Green Tomato Cars fleet, around 120-150 miles a day.  A Mirai can travel up to 300 miles on a full tank of hydrogen, so the private hire cars should be refuelling every two days on average. 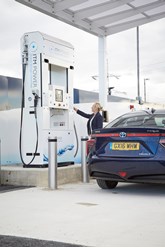